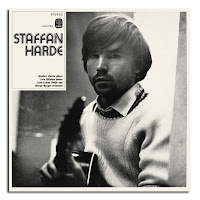 In 1972 a musician from Smögen, a tiny island off the West coast of Sweden, released his eponymous debut album that was to spark-off a career in music, or so it was hoped.  At the time the album was overlooked and quickly disappeared without a trace leaving the said musician disillusioned and downhearted.  Without receiving the critical acclaim that he thought he should get from such a bold statement he sadly left his brief tenure on the music scene to work in a bakery on his home island.
Like many before him and many since, Staffan Harde’s dream of successfully having his music marketed, producing a product that might gain the attention of the world of listeners and then lead on to a prosperous & rewarding career didn’t work out as he had envisaged.  Unlike many others who may have tried, Staffan Harde had produced something that the world really should have woken up to and taken note of.  How different things could have been if this promising debut had received a more positive reception.

A sought after and little-known rarity this LP has for the first time been released on CD thanks to Mats Gustafsson, a long time fan of the record, who produced the re-issue for Corbett vs. Dempsey. s
The album contains a collection of pieces for a variety of instrumental groupings from the quartet at hand, guitar, piano, bass, and percussion.  Apparently influenced by Schoenberg’s twelve-tone music, Staffan Harde’s guitar playing explores the discordant melodies and harmonies more akin in spirit to Schoenberg’s more freely atonal pieces, (rather than the stricter method of the twelve-tone system), whilst showing the firm roots of a jazz tradition.  ‘Bigaroon’, the shortest piece for quartet of guitar, piano, bass and drums, with it’s swung syncopated rhythm, fine interplay and dissonant harmonies between the piano and guitar completely sums-up what this album is about in a concise and precise manner.  ‘Substance II’ is a guitar solo containing varied well-known tunes, including nursery rhymes, that have been harmonised dissonantly, and although this sets-out Staffan Harde’s musical aesthetic, the piece itself has a very academic and compositional exercise feel to it.  Not so for the pieces ‘Cordial L’, and the longest track ‘Electrification’ which provides us with some beautiful playing not only from Harde’s clean toned freely atonal melodies and fast angular legato runs, but also from the other instrumentalists who carefully add their delicate accompaniments, creating a couple of pieces that have the subtle shade and tone of a charming watercolor.

Harde himself recorded some of the music on this album at his home, whilst the rest of it was recorded in a studio in Gothenburg.  Due to this there is a difference in recording quality amongst the tracks but nothing that detracts from the wonderful music on this album.  Re-packaged as a miniature gatefold sleeve the album that has been known only to collectors, and those in the know such as Mats Gustafsson, Staffan Harde’s long lost classic is now readily available to the rest of us.

This only release from Staffan Harde documents a raw but promisingly original music from the guitarist, which over the years could have blossomed into something else, not to mention the impact he may have had as a collaborator with other well-established musicians.  Thinking about an ‘alternative reality’ might be a great parlour game but in this instance it can’t help but make us think that had things worked out differently for Harde he could have become a highly original and critically acclaimed voice within the world of free jazz.