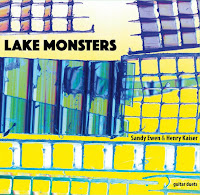 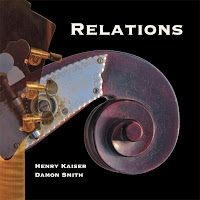 The tracks on Relations take their titles from poet Peter Riley’s Company Week, a book improvised along with the fabled Company Week concerts in 1977. Riley, writing at an earlier time about Derek Bailey, also does well to describe the duo of Henry Kaiser and Damon Smith: the guitar and bass are “fully realized in [their] entire range of modes, every possible kind of vibration of string and of the wooden hollow by every manner of plucking and otherwise manipulating the length of gut or wire.”

The acoustic strings of Relations provide ample opportunity for a real duologue; if you accept the analogy of improvisation as a conversation, an unadorned duo may be the clearest and most engrossing. Kaiser was among the first musicians Damon Smith played with upon turning to improvisation, and the two have a musical rapport that reflects their twenty years of collaboration. Relations is an hour of low-velocity, high-impact playing, a mist of messy partials thrown from buzzing, rattling strings. Kaiser’s deft command of harmonics and his brusque, percussive attack are parried by Smith’s wild technique, a furor of skittering bow, thumped wood, and sul ponticello howls. Though a fleet pizzicato player, Smith has increasingly turned to bow work to prod at the limits of the bass, and on tracks like “A Garden, Then Not A Garden” he all but erases the idea of notes in favor of more complex, indeterminate sounds.

But if Smith is pushing ever closer to a center of pure sound, Sandy Ewen is who he will find nestled at its core. Very little about Ewen’s guitar playing is recognizable as such: guitar flat in her lap, she jabs at pickups, scrapes along the bridge, clatters under the strings, tweaks knobs. Her mode of improvising is a whole different species than Kaiser’s, though armed with an electric guitar and his pedals, on Lake Monsters he is often able to contend with Ewen’s peculiarity.

Still, dialogue is more strained here: rather than the fluent repartee of Relations, Lake Monsters is more like charades. In some respects, Ewen and Kaiser powering through their unfamiliar pairing is more in the spirit of Company Week than Relations; common ground becomes less the means to begin improvising than an end that must be sought through intense, focused playing. Ewen acts as a colorist on the more effective tracks like “Mokele-Mbembe” and “Storrsjoodjueret,” with Kaiser plucking harmonics on his acoustic guitar while Ewen hauntingly seems to pass between planes of existence. On “Old Greeny” and long centerpiece “Irizima,” she pushes him into experiments with feedback, Kaiser’s long, distorted vibrato tunneling through her splintered, buzzing haze.

Ewen is also notably a visual artist who makes “microcollages” by melting plastic and other materials together onto projector slides. Being aware of this seems relevant, at least in part, to her music, which similarly melts the guitar’s output—both her own and Kaiser’s—into swirls and drips of sound. Texture feels like a tangible musical quality in Lake Monsters, rather than a word deployed when at a loss for words.

Two provocative releases from last year that aren’t to be missed, and show not only Kaiser’s versatility, but also that of Smith’s Balance Point Acoustics label.