Editors note: we refrained from a star rating on this fascinating new documentary on the Schlippenbach Trio only because Martin provided the excellent liner notes for the DVD's booklet. It could easily be a 5 star review, but instead, allow him to give you an inside perspective ... 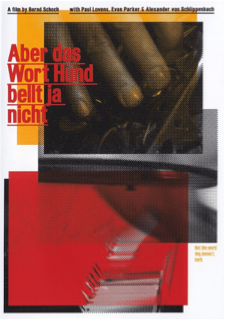 How can you make a documentary about a free jazz band and try to do the musical genre justice? Is it possible to avoid pictures that are actually superfluous and only distract from the music? That was the challenge for director Bernd Schoch when he decided to follow the Schlippenbach Trio (Alexander von Schlippenbach on piano, Evan Parker on saxophone and Paul Lovens on drums) on their “winter journey“, an annual tour they’ve been doing for about 40 years now and which leads them to almost the same venues every year. The jazz club in Karlsruhe was the place Schoch chose for four consecutive concerts between 2007 and 2010.

What strikes you immediately is the film’s very rigid form: But the Word Dog Doesn’t Bark is about fragments, bodies and reduction. It consists of four parts, the first three episodes show the individual musicians, only the last one presents the band. What is more is the fact that Schoch concentrates on parts of the body which are crucial for the process of music making, e.g. when the camera focuses relentlessly on Lovens’s right forearm, Parker’s face and hand or Schlippenbach’s fingers. However, the film doesn’t only show hands in motion. Especially when we watch Evan Parker we can also observe how he waits for the right moment to join the others. As a result of this approach, the film gets very close to its protagonists, there is hardly any distance due to the extreme (and sometimes overwhelmingly beautiful) close-ups. This can lead to surprising effects, for example when the camera creeps along Schlippenbach’s face, it makes him look like a strange creature completely immersed in his music. Although you are drawn into the images, this way of presenting the trio is not easy to enjoy. Schoch confronts the viewer with very long shots, which is why you have to concentrate and be patient - like the musicians themselves when they improvise.

These sequences are contrasted by short interview passages in which you can see winter landscapes, birds on a winter sky or drawings of Schlippenbach’s son. They are about creating improvised music (Parker, Schlippenbach) or tour routines and food (Lovens) and the musicians explain how important musical routines are for them, and what it means to create something new on the basis of what they have achieved so far without repeating yourself.

Schoch tries to paint a picture of the trio with these fragments, he wants to display the process of music making itself. Schlippenbach, who was very skeptical during the shooting of the film, is very satisfied with the result in the meantime.

The Word Dog Doesn’t Bark is a very unorthodox documentary about one of the most fascinating and long-lasting projects in free jazz and at the end you will know what roast duck with dumplings and red cabbage and free jazz have in common.

The Word Dog Doesn’t Bark lasts 48 minutes (like a typical set of the trio). The DVD also contains two hours of extra interviews, which are very insightful and sometimes funny and melancholic (Paul Lovens is a wonderful story-teller).

You can get the film from downtownmusicgallery.com, from www.instantjazz.com or directly from
the artist: http://www.berndschoch.de/

Mark says....
this is a truly innovative film presenting this great trio's music making with intimacy and insight. If you've been lucky enough to see them live this document only enhances that experience. The generous length interviews are a real bonus. Who knew the importance of duck lunches to great music making?