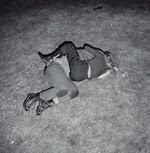 Swedish sax player Anna Högberg's all-female sextet Attack's debut album is one of the most expected releases this year. Attack premiered in the 2013 edition of the Stockholm Jazz Festival and since then its performances gained praises all over, including a heartfelt endorsement from Högberg role-model, sax-titan Mats Gustafsson, who promises that Högberg’s Attack will “melt your brain as we know it”.

Högberg's compositions, as well as a short one by Bergman, emphasize the individual voices of Attack and suggest a fresh and irreverent perspective on modern and free jazz. Högberg playing tends to burst instantly into fiery, restless solos, rich with melodic inventions, while Wättring and Larsson, each in her own distinct manner, opt to structure their solos in a more patient and methodical way; Ullén fleshes the loose theme with resonating, skeletal segments and inventive rhythmic playing while both Bergman and Lund inject a highly personal sense of pulse and space, still locking in driving rhythms.

Together Attack can alternate quickly between melodic and contemplative interplay, almost as if breathing-singing tender songs, and an intense and energetic eruptions, often in the same piece, and at times even adds experiments with sonic searches. Attack can attack powerfully, without holding back, as on the opening piece “Attack” or on “Borderline”, or trying to merge the contrasting approaches as on “Familjen”. “Lisa Med Kniven” highlights the imaginative and creative language of all musicians, beginning with unique bass lines of Bergman, rolling into light yet open swinging pulse with Ullén and Lund while the three saxes front adds layers of the theme with high-octane power and beauty, culminating with a great solo of Högberg. The last piece “Högberger”, stresses again the saxes massive front, bursting now in nervous parallel solos, but concluding in a poetic, compassionate hymn-like coda.

Prediction: I'm going to play the opening 25 seconds of "Borderline" on repeat about a thousand times this year.