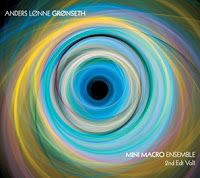 
Norwegian composer-reeds player Anders Lønne Grønseth has developed a highly original compositional aesthetic for his Mini Macro Ensemble, called The Bitonal Scale System. Grønseth is inspired by his studies in the modal scale theories of Indian classical music and the maqam-scales system of the Near and Middle-East (and through his collaboration with Indian lap-steel guitarist Debashish Bhattacharya) in modern 20th music, most notably from works by Olivier Messiaen, Arnold Schönberg, and Béla Bartók and in improvisation over chords and chords sequences as played by jazz musicians and from his experience as the leader of the Sphinx quartet and duo work with its pianist David Arthur Skinner. As adventurous and cerebral as this innovative, genre-bending combination of sonorities and ideas may sound, it is actually transformed into an arresting, organic language that excels with an unassuming flow.

Grønseth compositions are beautifully performed by an octet that features reed and string instruments, Fender Rhodes, and the Indian tabla drums. This is the second, expanded edition of the Micro Macro Ensemble, following the self-titled debut (Pling Music, 2008) that featured Grønseth and pianist Morten Qvenild improvising over arrangements for a string quartet. The current ensemble began working together in 2011 and features, among others, keyboardist Anders Aarum, tuba player Martin Taxt (known from the experimental Microtub trio and his label, Sofa Music), and cellist Sigrun Eng (who plays in the Slagr trio). The ensemble plans to release another volume of its work this year.

The ten compositions offer a rich spectrum of colors and sonorities that blend naturally despite their different origins, without sounding too exotic or conceptual. Grønseth succeeds to balance all the elements and to find common, continuous veins between all. In the opening "Aureolin", the ethereal-sounding Indian bansuri flute of Hanne Rekdal introduces the fleeting theme, before the atmospheric-distorted Fender Rhodes of Aarum develops this vein, while the ensemble enjoys the light swinging pulse of versatile tabla player-percussionist Andreas Bratlie and bass player Audun Ellingsen, whose rhythmic power brings to mind the telepathic play of late multi-instrumentalist Colin Walcott and bass player Dave Holland (beautifully captured on Cloud Dance, ECM, 1979) . The spirit of the meditative opening part of the Indian raga, the alap, is given a fresh, impressionistic interpretation on “Orchid”, with moving clarinets solos by Grønseth and Morten Barrikmo. The mysterious “Auro Metal Saurus” suggests a complex, dark cinematic texture with an impressive tuba solo by Taxt that references the rhythmic role of this instrument in Henry Threadgill ensembles. This most beautiful album is concluded with the reserved, emotional “Malachite”, sounding like an untimely, universal hymn, embracing all sounds - melodic, airy and even some eerie ones.