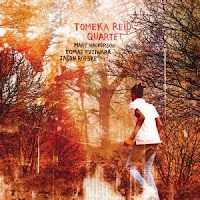 Simply seeing the names of the musicians in this band made me do a double-take. Drummer Tomas Fujiwara, bassist Jason Roebke, guitarist Mary Halvorson are all in cellist Tomeka Reid's quartet?!? The various styles of these players coming together into one NYC-meets-Chicago supergroup works so well on paper it promises to be an absolute dream. But you know how supergroups turn out... Well screw your cynicism – and mine – because the debut recording from the Tomeka Reid Quartet is an absolute gem. Seriously, I have to pull back a little when writing about it or I'll be ending every other sentence with five exclamation points. Nobody wants to read that shit.

So what's so great about it? I'm going to list several reasons & try to contain myself.

This was my pick for Album of the Year in 2015. It is the best debut album from a jazz quartet I've heard in a long, long time. It is seriously making winter bearable. Highest recommendation.
Paul on Tuesday, February 16, 2016
Share

Nice take on an excellent album--I have to second the enthusiasm and recommendation!

Agreed with the review and previous comment.
I think "pure unadulterated joy" is a perfect
description. I found myself smiling within moments
of playing this for the first time.

I'd love to hear a Tomeka Reid/Mary Halvorson duo
album.

I'm honestly glad that everybody is regarding this so enthusiastically but when I bought this at a concert last fall, I was a little disappointed compared to how they sounded performing these songs. I guess that's another way of saying everybody should make seeing this group a high priority.

Hello Cappy! Me wants to see them live!!

Saw this band in Milwaukee the day after they performed at the Chicago Jazz Fest 8/2014 and they were throughly enjoyable. Got a mid-set standing ovation. While this disc is fine, it cannot compare to eeing them live.

Hello Stevie Rey, glad to see you figured out how to identify your comments although I pretty much recognize your writing style. Last year was a good one for Tomeka Reid between this quartet, playing in Roscoe Mitchell's Celebrating Fred Anderson and the Artifacts disc with Nicole Mitchell and Mike Reed.

My Top Jazz album of 2015 as well. Excellent stuff!

i love the CD too.
what do you mean by pulse-time and impulse-time?