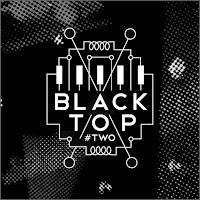 Black Top is Pat Thomas and Orphy Robinson, two multi-instrumentalists who have steadily made a name for themselves in the UK experimental and improvisational scene. Their debut, entitled #One, was recorded with saxophonist Steve Williamson. That album, which was “dedicated to exploring the intersection between live instruments and lo-fi technology,” was a fascinating mash-up of tinny synths, piano, marimba, skittering loops, and Williamson’s austere saxophone. Unlike many jazz pieces that utilize electronics in a purely supplementary fashion - beats splattered indiscriminately over the “core” ensemble - #One attempted to weld them together and mask the seams. For the most part, it was a great success.

Black Top return here with a different special guest, Evan Parker. Parker himself  is no stranger to experiments with electronic sound; his ElectroAcoustic Ensemble has been active since 1990, and their last recording Seven (reviewed here by Martin Schray) is an intriguing album that gets better with each listen. Despite their similarities, however, the two groups are vastly different in other ways - whereas Parker’s ElectroAcoustic Ensemble deals with swathes of electronic sound, bubbling sci-fi pulses, and abstract swirls that threaten to engulf the listener entirely, Black Top are more drawn to the rhythmic and the repetitive. This is not surprising when one considers the origin of these two musicians - Orphy Robinson is of Jamaican descent, and Pat Thomas’ early musical interests took him not only to classical music and jazz, but to reggae music. These ties to Afro-Caribbean music comprise the beating heart of Black Top’s experiments in sound, and they give #Two an enthralling air of idiosyncrasy.

“Tourmaline” opens with just Parker and Thomas, but Orphy Robinson eventually joins in to contribute electronics. On “Gold,” Robinson taps out an alluring figure on bass marimba, while Thomas’s piano slips into a frenzied stream of notes. Meanwhile, Evan Parker plays with a relatively reserved air. “Star Line Was What He Said!” takes things into more adventurous territory, with the electronic elements becoming more abstract: there are abrasive stabs of static, a repetitive vocal loop, and even some stretches of lo-fi techno. When the track is nearing its end, Thomas returns to the piano and offers a stuttering, circular series of notes - it would seem like a perfectly logical accompaniment to Parker’s improvisations if not for the electronics, which house these largely familiar free-jazz tropes in a new and somewhat startling context.

On “Ivory, Uvory and We Very,” the trio come to resemble a traditional jazz group, with Thomas sticking to piano and Robinson sitting down at the drum-kit. Interestingly, it is here where Parker sounds most comfortable, playing with more unrestrained energy and pushing his sax into the higher registers. “Ebony Speaks Like a Drum” continues that format, Thomas playing the piano with a percussive force that rivals Cecil Taylor and Robinson seeking to hold everything together with an unwavering tempo.

“Afronauts Ra Black Fore Moor” is the longest piece on the album, and it’s characterized by churning electronics and occasional lo-fi beats that arise and dissipate at random. Evan Parker takes a more spacious approach to playing here, sticking to a more subdued style that is both meditative and incredibly expressive. Soon, Thomas is at the piano again, and the duo of he and Parker are encased in an unsettling array of vocal loops. With Thomas’s uncanny approximation of honky-tonk, the ghostly voices and Parker’s playing that steadily increases in both speed and intensity, this piece is perhaps the most enthralling on the album. It captures well the thing that Black Top does best: taking various elements of improvisational jazz from the last fifty years and repurposing them, inserting them into fresh contexts and and juxtaposing them with sounds that are often viewed as disparate and unrelated.

On the final track, “Carried Way Beyond,” Robinson utilizes the steel pan to great effect, calling to mind the ethnic sounds of the Caribbean. Meanwhile, Thomas traces out a straightforward, dancy rhythm on the piano that matches Robinson’s in its hints of Afro-Caribbean music. Eventually, however, these somewhat familiar traces are obliterated, only to be replaced by a vintage drum-loop, menacing synth-line, and ethereal washes of sound.

Perhaps predictably, my favorite parts of #Two were when the trio played with a more traditional setup - in these moments, there seemed to be more passion, more energy, and a greater sense of cohesion between the three players. In any case, it’s a fine experiment, and I can’t wait to see where the two members of Black Top go next in their sonic explorations.