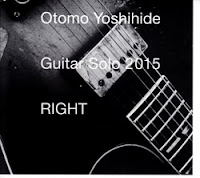 Last year Otomo Yoshihide released Guitar Solo 2015 LEFT, in which he paid tribute to his former teacher Masayuki Takayanagi, one of the most important figures of the Japanese free music scene from the Sixties onward. In that album, among original compositions and improvisations, Otomo revisited two free jazz classics closely related to Takayanagi (“Song for Che” and “Lonely Woman”), and played the very same guitar, a 1963 Gibson ES-175, that his teacher used for a large part of his career, and with which he recorded such masterpieces as the album “Lonely Woman” in 1982.

Guitar Solo 2015 RIGHT can be considered a sort of a twin release, with an almost identical title and cover art, in which Otomo uses the same guitar, even if the material is totally different.
In this case we have a “reconstruction” of a piece that was originally created for the exhibition "Otomo Yoshihide: Between MUSIC and ART", that was held in Tokyo between 2014 and 2015. For that occasion, the musician recorded a total of 123 takes ranging in length from a few seconds to a minute. After the recording the material was given to Akihito Matsumoto, that used it to feed the sound system at the exhibition, controlling the output through a computer program that mixed the fragments in always changing configurations.

Even in this aspect the connection with Takayanagi is strong, with a work that has a deep resonance of the "automated" experiments that the guitarist explored in his later years, as in "Action Direct". The strategies employed here, and the resulting sounds, are very different, though.

Consisting of a single piece over sixty minutes in length, this record has no defined identity. The opening is reminiscent of the free improvisation language pioneered by Derek Bailey, with short bursts of sound intersecting and overlapping through the sound field. Soon the atmosphere changes and ghosts of melodies emerge, in contrast to the previous samples. This dialogue continues throughout the entire track, with ever-changing patterns and sounds, but always keeping a relaxed approach that creates an apparently static, hypnotic environment, even if the music is in a flux of continuous transformation and the guitar is explored in all its sonic possibilities.

The absence of any real development may well be the defining trait of this record, but the end result is far from boring, and demonstrates once again Otomo's ability in creating a rich structural arc through seemingly distant musical fragments, and his mastery in using both a vast vocabulary of extended techniques and more traditional approaches on the guitar.

A fascinating blend of improvisation, randomness and precise compositional logic, this record is a major addition to Otomo's discography.