There are very few working free jazz big bands, if any big band at all, that toured as much as Norwegian drummer Paal Nilssen-Love's 12-piece Large Unit (including the sound man Christian Obermayer) in 2015, not even his close collaborator Mats Gustafsson’s Fire! Orchestra. 40 performances within 60 days, beginning with a European tour, continuing with a North American tour, and finishing with a second European tour. Such a busy schedule called for a unique documentation.

The resourceful Nilssen-Love, already acting as the drummer, composer, booking agent, producer, festival organizer and merchandizing tycoon (you can get the Large Unit albums in vinyl, discs and cassettes box formats plus t-shirts, tote bags, vinyl bags and even Large Unit underpants), suggested a new format - a photo book plus two live recordings of the Large Unit and a shorter EP. 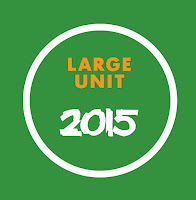 2015 is a beautiful limited-edition gem, not only because of the great music, but also thanks to the insightful photos of of bass player Christian Meaas Svendsen and Peter Gannushkin, taken on-and-off-stage and the amusing notes of all the Large Unit musicians and the interview with Nilssen-Love.

The first disc was recorded at the Casa del Popolo club in Montreal and features small units of the Large Unit, one duo and three trios, playing short free-improvised pieces. The Large Unit interplay often involves such small units playing off and against each other, and these impressive pieces highlight the strong individual languages and offer new ideas for future combinations within the Unit interplay.

The second disc capture the Large Unit at the height of their powers in the last performance of the North American tour at the Earshot Jazz festival in Seattle. It feature new arrangements of older pieces - “Fortar Hardar”, “Erta Ale II” and “Fendika” and two new pieces - “ANA”, the title piece of the forthcoming Large Unit release, and “Circle in the Round”. The Large Unit plays with endless fiery energy, even when it stripped down to small units, as if possessed by a higher force. Keränen, trumpeter Thomas Johansson, Äleklint and Holmlander shine on “Fortar Hardar” before the inevitable volcanic eruption of the whole Unit. “ANA” revolves around an infectious brass fanfares and a manic driving pulse that just keeps intensifying from the first second until the last one. “Circle in the Round” is the only loose form piece, developed patiently through a series of individual solos, including a most beautiful one of Kjær on the flute. “Erta Ale II” is re-arranged as a piece that highlight the massive front line of Äleklint, Johansson and sax players Klaus Elierhusen Holm and Kjær. The whole Unit now is in tight and fiery mode, ready for the last piece, the Ethiopian-tinged explosive-addictive pulse of “Fendika”.

The unassuming perspective of Svendsen photos, together with his intuitive sense of photo composition and the short notes of the musicians, shed light on the demanding life on the road. The complicated logistics puzzle of arranging such tours, having all the musicians packed in three dense vans, and the need to balance different needs and tastes, including between vegan and carnivores. But above all it reflects the fun that all had together between “driving, soundchecking, gigging, sleeping”, multiplied few times, as Äleklint summarizes it. But with few detours to the Niagara Falls, swimming in Lake Erie, singing karaoke at a Korean barbecue after a 6-hour performance, buying shoes and driving a Harley-Davidson. Others like Kjær and Holm comment about the different types of humor - Norwegian, Finnish and Swedish, Keränen advises where to avoid eating Polish food in Chicago, but all are very appreciative about this invigorating experience. “This is what we live for”, writes drummer Andreas Wildhagen. “Nothing can be more rewarding than creating energy and music in the moment, let the sounds flush and blow out like they should in the ‘now’”.

Nilssen-Love, obviously the most experienced working musician in this band, performing about 200 to 250 days a year, notes that the Large Unit “takes having fun serious”. He suggests insightful perspective about the importance of such tours: “a band needs experience from the road in order to develop. The music changes and people interact in completely different way if you’re out for more than a week or so”. He concludes by saying that “this feels like a beginning of it”.

He is completely right. This Unit has much more to offer. 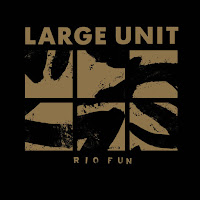 Rio Fun is piece that was part of the Large Unit repertoire already in 2014. This EP was recorded live at the end of the first European tour of 2015 at the Bimhuis club in Amsterdam.

It is a 25-minutes complex piece that evolves through few phases, emphasizing the tight and fiery interplay of the Large Unit and its rich sonic language. It begins and ends with a gentle and quiet dance-like movement of brass coupled with disturbing electronics, and moves through a fierce duel between trumpeter Johansson and trombone player Äleklint, commanding solos of Holm on the baritone sax and Holmlander the tuba, amid intense and dense onslaughts of all the Unit.