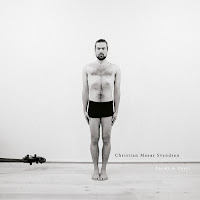 Forms & Poses is the second solo double bass album of the prolific Svendsen, after W/M (Va Fongool, 2013). He plays in the free and modern jazz outfits - Paal Nilssen-Love Large Unit, Mopti, Ayumi Tanaka Trio and the duo Duplex (with sax player Harald Lassen) and heads the new musicians-collective label Nakama Records.
As the title of this album suggests, it is focused on exploring the physical connection between the musician and the massive double bass, as well as the obligatory constant practice of a musician, as of any human being, who attempts to reach an open and profound awareness. For Svendsen this kind of practice is not only intellectual or physical one, but  a true spiritual work, as in Zen Buddhism meditation or Yoga practice.  "Practice every day, in every moment, always. Practice, practice, practice - and all is coming," he writes in his liner notes.

The first, 20-minutes “Vita” was recorded at the vibrant Vigeland Mausoleum in Oslo, a favorite recording place for some of the most adventurous local musicians, due to the 15 to 20 second natural reverb (double bass player Michael Francis Duch recorded there Tomba Emmanuelle, Sofa Music, 2015, and guitarist Stian Westerhus recorded The Matriarch And The Wrong Kind Of Flowers, Rune Grammofon, 2012). Svendsen describes this composition-improvisation as a “life-to-death journey through the very depths and heights of his instrument”. It is a ceremonial piece, that sticks to a basic repetitive and resonant pulse that Svendsen keeps expanding, coloring and manipulating it with great reserve and total command. Then the sonic outcome, with the dark, deep tones that keep multiplying into more and more overtones, offers a new realization of the double bass range and its hypnotic power.

The other three short pieces were recorded in the Rinzai Zen Center in Oslo. Each stresses a different aspect of Svendsen extended techniques.  “Aria prefix M-” is a gentle piece, developed with an eccentric harmonic abstraction. The title piece is a full body exploration - hands, feet, the whole body, and obviously the bows - of the double bass, divided into short excerpts, all highlight the rich range of the instrument. The final piece, “Chidori” turns the double bass into a kind of Hardanger violin, with endless sympathetic strings, that mimics a noisy choir of talkative, hungry birds. 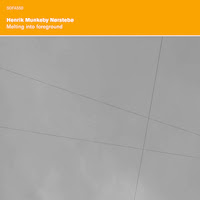 Melting into Foreground is the second solo album of the experimental Nørstebø, following his self-titled one from 2011 (released on Creative Sources). Nørstebø plays in the free improvising Norwegian outfits Lana Trio, As Deafness Increases, Whirl and collaborates with Swedish master improvisers, drummer Raymond Strid and double bass player Nina de Heney (on last year acclaimed Oslo Wien, Va Fongool).
The first piece, “Internal Sources of Heat”, features Nørstebø exploring the whole sonic spectrum of the trombone, from abstract pure tones and almost silent microtonal sounds to noisy multiphonic ones, with no effects. He plays with focused control and measured reserve and shows a wise sense of using the resonant acoustics of the Capella Johannea in the Majorstuen church in Oslo, where this album was recorded. Nørstebø manages to transform the trombone in this piece into a unique sound generator, in a similar manner to the most experimental playing of British sax player John Butcher. All while balancing between intuitive following of the fleeting sounds and a linear construction of this piece.

On the second title track Nørstebø adds electronic drone stemming from a pre-recorded piece on at half-clarinet, later multi layered in irregular distances in order to create a natural kind of distortion, then slowed and pitched down many times until it sounded as a monochrome white noise. Nørstebø constructs the sonic palette of this piece carefully, mirroring the background manipulated sounds, sometimes quite noisy feedback ones, with a quiet, fragile play of the trombone ethereal overtones until all sounds blend into an arresting, nuanced texture.