As we wrap up another 'Guitar Week', we offer a small roundup as a coda. There are many more new releases and re-releases that deserve attention, but hardly the time to do it all... 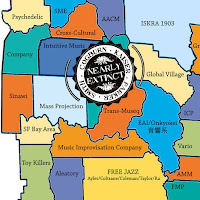 Nearly Extinct is a survey of free jazz improvisational approaches, and an attempt to preserve the many styles that developed throughout the world during the latter half of the 20th century. Guitarist Henry Kaiser's quartet does this by referencing the approaches of the AACM, AMM, Free Jazz, Music Improvisation Company and many more. The conceptual map that adorns the cover of the album is a key to the music within and the album tracks do not represent so much songs but rather miniature explorations that underscore the synergistic magic of improvisation. Kaiser's guitar work is at times reserved and at others scorching, and Steve Parker's trombone can be raw and eviscerating as well a contemplative and relaxed - all of which can be heard in the 20 minute opener 'East Cape Yupik'. The group is rounded out by percussionist Chris Cogburn and bassist Damon Smith, and all contribute to this fascinating survey of the state of free improvisation. 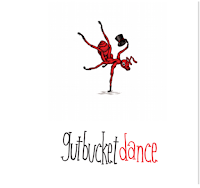 NYC's Gutbucket is guitarist Ty Citerman, saxophonist Ken Thomson, drummer Adam D Gold and upright electric bassist Pat Swoboda who have been recording (in some form) as a group since 2001. Their latest, Dance, is a live album of new material recorded during a week-long residency at the Stone in NYC. Their music is definitely on the rock side of jazz-rock and their approach is energetic to say the least. The opener 'Luton' comes out swinging - or rocking - and doesn't let up as Citerman and Thomson spin out a tight melodic line with sporadic free explosions for a minute and half before Thompson delivers a frenetic solo. The follow up "Example" is even more intense, veering into metal. Citerman takes over half way through for a fiery dense solo. Later tunes, like 'Rum Spring' showcase a lighter side to the band, the writing careening back towards the modern jazz side of the jazz-rock line, but always sporting a tasty edge.
Paul on Friday, March 11, 2016
Share