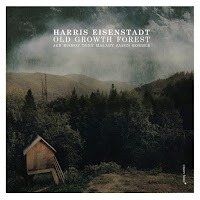 Coming from the sonic cohesion of Canada Day IV’s atmospheres and textures, Old Growth Forest is decidedly more diverse. After taking a quick look at the song titles, that’s perhaps to be expected: each piece is named after a particular kind of tree, with one track alluding to a specific national park, “Big Basin.” An “old growth forest” is a forest that has been left untouched, a place that has been allowed to follow its own natural course, without interruption. It’s a fitting analogy for the music here. There’s a lot of variety in this recording, and a sense of unimpeded flow; like a forest with its myriad specimens, this album has parts that swing, parts that groove, parts that confound, and parts that astound.

“Larch” launches us right into the woods, bouncing along on a sunny theme that steadily gets more tangled and knotted. It’s a brief jaunt, however - with the next piece, “Pine,” Roebke’s solid bass work and Jeb Bishop’s gurgling trombone introduce us to a world that is markedly more dim-lit and abstract. The central melody is carried by Roebke, but it intermittently drops out to allow the players to engage in hesitant, stop-and-start exchanges with one another. Eisenstadt is especially crucial for the success of this beguiling tune: he exhibits a careful mastery over the direction of the piece, occasionally settling into a groove, occasionally clattering out shapes that, despite their loose nature, remain incredibly well-structured. The Clean Feed website notes that, for this album, “some written material was prepared only to define a unified identity to the music, and everything else was kept open.” That kind of organized chaos is in ample evidence here, and it’s one of the qualities that makes this group so exciting to listen to.

“Redwood” finds the group bound together in a tight-knit tempo, one that speeds up and slows down in near-imperceptible gradations. Malaby and Bishop sometimes join together in lock-step, and sometimes they wind around each other like two vines crisscrossing their way up the same mottled trunk. “Spruce” is considerably more relaxed; Roebke lays out a pulsing, insistent rhythm, and Eisenstadt buttresses that with his own unhurried cadence.

In “Big Basin,” Bishop and Malaby have the opening word, and they take that opportunity to flitter and whirl around each other in captivating spirals. Listening to these two and their interactions never becomes tiring; like the legendary late-1970’s duo of Anthony Braxton and George Lewis, they maintain a keep rapport with one another - sometimes exact, sometimes queasily (and compellingly) off-center.

This album is an excellent demonstration of “jazz-as-play.” Four musicians, four brains, all working together to find a common ground and produce a unified sound - but they never get stuck in the mire of predictability and predetermination. The structures are not there to constrain the players, but to inspire them and give them “roots.” Like massive redwoods, after the roots have settled in the soil, these four aim for the sky - and, on Old Growth Forest, they largely succeed.