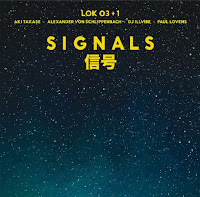 
LOK 03 is the family unit of master German pianists-composers Alexander von Schlippenbach, his wife Aki Takase, and Alex’s son Vincent von Schlippenbach, aka DJ Illvibe who plays on turntables and sampling keyboard, together with von Schlippenbach's frequent collaborator for more than four decades in the Schlippenbach Trio and Globe Unity Orchestra, drummer Paul Lovens. LOK 03 recorded its self-titled debut a decade ago (Leo Records, 2005), an imaginary soundtrack to the 1927 avant-garde silent film of Walter Ruttmann’s Berlin: Die Sinfonie der Grosstad (Berlin: Symphony of a Great City), a cinematic profile of a one day in the vibrant Berlin. This album created a unique busy and restless tapestry of sound referencing free jazz and hip-hop.
Now the star-scattered cover and the pieces titles suggest another imaginary soundtrack to some futuristic sci-fi thriller. The 16 pieces highlight the masterful and highly literate interplay of von Schlippenbach, Takase - both performing and recording frequently as a team, their last recording is So Long Eric! - Homage to Eric Dolphy (Intakt, 2014) - and Lovens colliding with DJ Illvibe irreverent ideas that subvert and deconstructs these experienced improvisers attempts to form any notion of common pulse or narrative. Von Schlippenbach, Takase and Lovens respond immediately to the sonic challenges of DJ Illvibe, force him to adapt his wild ideas to a loose texture or narrative. It happens when Lovens charges “Animal Gun” cartoonish soundscape with an ironic rhythm, when DJ Illvibe adapts a poetic child-like sculpting of brass sounds to a gentle piano texture on “Animals Exodus” or when he attempts to push the linear course of the piano duet of von Schlippenbach and Takase backwards with manic alien sounds on “Curved”.
What may sound as a recipe for an anarchic and chaotic stew of eccentric sounds gains its own logic after few pieces. It may be be due to the kindred familiar spirit, the modest genius of von Schlippenbach, Takse and Lovens as well as their resourceful improvisation instincts of all four musicians but these are only speculations. The four improvisers simply create their own common ground, in a true Cageian spirit, where all sounds are beautiful, all sounds find resonance in each other ideas, extending and expanding these colorful ideas.
By now pieces like “Waterrun (Part 1)” shine with its weird quiet beauty, “Robot Attack” with its feverish rhythmic attack and “The Laboratory of Dr. Mabuse” (referencing the mysterious villain in Fritz Lang movies) with its unworldly tension-filled cinematic soundscape, all with arresting form of interplay. You cannot but admire von Schlippenbach, soon 78 years old, Takase, ten years younger, and Lovens, a year younger than Takase, and DJ Illvibe, for their daring spirit to experiment and rebel with and against any form, genre, style or convention.
Paul on Monday, March 28, 2016
Share

Rebellion against what exactly? Schlippenbach and others have been doing this kind of thing for close to fifty years.

Colin, he says you can't admire them for their daring spirit of rebellion etc. What more you do want?

I assumed the "not" was an error. Otherwise, the sentence doesn't really make sense: why conclude a review saying that you can't admire the musicians for something, particularly when they've been described as irreverent and subversive earlier in the review?

I guess the word "but" was missing in the last sentence. It makes sense now.

It was no doubt my old high german sense of humour that prompted me to omit the smilicon in my earlier comment.

"but" instead of "not" does indeed make more sense, but my original question remains. Free jazz has been established for many, many years. The notion that it's still in some kind of rebellion against something is a myth, making it sound like the music is frozen in a cliche, permanently on the cusp of revolution, when in fact it's long since moved on. It makes for a nice peice of melodrama, but in my view is very far from the truth.

Yes, I checked with Eyal, it was a typo. Aside from that, I suppose it's more of a comment on the enduring spirit - the quartet is a range of ages from 78 to 30 - that together keeps trying to do something different.