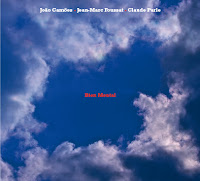 I came across the word “retrofuturism” recently, and it immediately called to mind Jean-Marc Foussat (I’m still digesting Improvising Being’s remarkable four-disc Alternative Oblique retrospective from last year). The word denotes a particular brand of nostalgia, a way of remembering how the past envisioned the future. Needless to say, this “future of the past” is often not what came to be. The EMS synthesizer propped on the table in front of Foussat is retrofuturistic, a dated and dulled cutting edge, at once a continuing promise of new frontiers and a stark reminder of how different the present is from that once-imagined future.

Bien Mental invokes a lot of complex ideas about nostalgia, music-making, and finding a way forward. Foussat’s analogue electronics are joined by João Camões and Claude Parle on viola and accordion. These instruments bring a strong nostalgia of their own, but how the three are blended in the improvisations of Bien Mental becomes the ground for our own ideas about what the music of the future might be.

“À vingt ans” opens with the sounds of a toy laser—sounds that immediately evoked my childhood—which are quickly looped and distorted, merging into a rising violaccordion drone. For three such different instruments, it’s both exhilarating and disorienting how easy it is to follow the thread of one, only to find it leads to another altogether. At times it’s uncanny how well Foussat can tweak some cosmic-sounding oscillation to pulse in time with Camões’ increasingly rapid bowing and Parle’s huffing bellows. Foussat is the rare knob-twiddler who can overcome some of the normal pitfalls of integrating electronics with improvisation: he frequently feeds external source material (including his own heavily-masked voice) into his setup, allowing him to rapidly and organically adapt pitch and rhythm to the vagaries of the other instruments, all while benefiting from the timbres and extensions available only to electronics.

Though Foussat’s electronic arsenal may favor him as the chameleon, it is Parle who is often the most surprising. Another improvising accordionist, Adam Matlock, has noted that the piccolo stop in an accordion produces a “tremendous sound, almost electronic in nature,” a function of its strong overtones. In the density of Bien Mental, the complex partials of Parle’s accordion turn it into a kind of aural Velcro, latching to its neighboring sounds and binding everything that much more tightly.

But where Foussat and Parle are seasoned limit-pushers, the young Camões makes an impressive showing. He already perked many ears last year as part of the Open Field string trio, and on Bien Mental he often adopts a modulated style of bowing that produces a continual, ebbing stream of sound not unlike the pumping of Parle’s accordion bellows. This microtonal spate darts in and around everything, consonant and dissonant at once. His is a sound both refined and unhinged, like the great Barry Guy: the unpredictability of free improvisation coupled with the precision of chamber music.

Bien Mental is a strange and captivating record. It might be true that some day, we’ll load it into our obsolete CD players, and with retrofuturistic nostalgia chuckle: “remember when we thought this is what the music of the future would sound like?” But today, it doesn’t seem so far-fetched—this is something we haven’t heard before.
Paul on Sunday, March 20, 2016
Share

Hello ! ... Great article ! ! lol ...
So, I strongly appreciate ur analysis ... AND u've to know that all the matter og this CD come from live direct recordings at J.M Foussat Home without no effects, filters etc ...