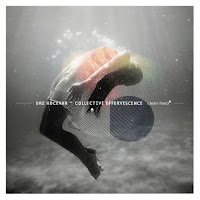 Just last year, the Dre Hocevar Trio released the fantastic Coding of Evidentiality, a record that took the concept of the “piano trio,” analyzed it with a careful eye, and proceeded to deconstruct it, resulting in pieces that were textured, evocative, and inventive. On that outing, the trio were briefly joined by Sam Pluta, who provided electronics - the track in which he appeared, “Critical Discourse Analysis (CDA),” made good use of the additional tonal possibilities, and proved the Trio to be adept at combining the traditional instrumentation of jazz with a wider and more expansive palette of sounds. That particular piece offered a tantalizing taste of what Dre Hocevar’s group could accomplish in the realm of electroacoustics, but it was, alas, only a taste. Luckily, the Trio has been expanded to a Quintet, with Phillip White utilizing electronics and Chris Pitsiokos on saxophone, and that small hint of possibility has grown into a full-fledged reality.

The album opens with the creaking, squeaking, scraping, and roiling “Unknown Unknowns.” With its measured formlessness and close attention to timbre and mood, it’s a perfect encapsulation of the group’s modus operandi - essentially, “embrace the ambiguous and oblique, and never say in one word what can just as well be said over the course of an entire novel, written in hieroglyphics, and etched in invisible ink.” In other words, Dre Hocevar’s Quintet is definitely not interested in making straightforward, easily-digestible jazz, and they make no pretensions towards accessibility. For better or worse (and in this writer’s opinion, it’s the former), Collective Effervescence is the sound of a group forging its own way ahead.

The following piece, “Notifications as a Theory of Consciousness,” brings both pianist Bram de Looze and electronic knob-twiddler Phillip White into the mix. White’s contributions are subtle, but they imbue the track with a striking sense of disquiet: soft gurgles, insectile chirps, and high-pitched beeps that call to mind the still-functioning control-room of some abandoned military bunker. On cello, Lester St. Louis mostly sticks to arco, but he conjures all manner of tones and textures, from the grating to the feather-light. Although he is the group’s nominal “leader,” Dre Hocevar’s percussion-work is surprisingly understated. In these first two pieces, Hocevar’s productions waft and whirl, hanging in the air like crystalline layers of fog. He gently brushes the cymbals, rolls softly over the kit, and is seemingly more interested in establishing tension than occupying a central role. In fact, no one can really be said to have a “central role” here - as the title of the album suggests, this is truly a collective.

On “Imaginary Synthesis Within Sublime Inside,” the tempo increases by a considerable amount, with Bram de Looze offering jaunty chords, Chris Pitsiokos moving from intermittent spurts and sputters to full-bodied outbursts, and Lester St. Louis producing a fervent flood of notes with his cello. As the piece progresses, Bram de Looze tends towards hesitant, searching clusters and nervous runs, providing a much-needed injection of rapidity after the relative languor of the previous tracks.

“1987’s” carries on in a similar vein, with all of the members contributing equally to the wild tempest. Phillip White buzzes and warbles with his electronics, Dre Hocevar pounds the kit with an alacrity that is somewhat surprising, and saxophonist Pitsiokos finally lets loose a little. Likewise, Bram de Looze sends the piece tumbling forward with his mad-dash, exuberant sprints, and Lester St. Louis explores a bold pizzicato attack on the cello.

“Effervescence” can be defined in two ways, according to http://oxforddictionaries.com. First, it can be “bubbles in a liquid; fizz.” Next, it is “vivacity and enthusiasm.” I’d suggest that both of these definitions are apt when considering the Quintet that Dre Hocevar has assembled. Like a bottle of cola that has been shaken and prompty opened, there is a distinct sense of pressure, build-up, and eruption on this recording - the players are bubbling over with ideas, with innovative approaches, and one can’t help but be impressed by the abundance of creativity to be found here. As for the second definition, it’s clear that the players are enthusiastic about this music; there’s no ennui, no sense of treading over well-worn ground or propping up tired jazz tropes. The sound the Dre Hocevar Quintet has made here is fresh, vital, and rife with ambition, and I’m genuinely excited to see where they take it next!
Paul on Monday, March 21, 2016
Share