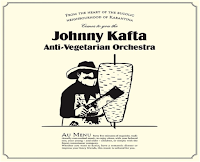 The fusion of progrock and free jazz seems to be the flavor of the season, albums combining elements of these genres have sprung up like mushrooms recently. Just have a look at Spinifex’s latest albums Veiled and Maximus, Krokofant’s II, Nels Cline Singers’ Macroscope, Sax Ruins’Blimmguass, Svenska Kaput’s Suomi or Slalom’s Wunderkamera. Eventhe pre-listenings of the new Fire! Orchestra album Ritual suggest such a style mix.

Back in 2009 Johnny Kafta Anti-Vegetarian Orchestra was founded by members of punk rockers Scrambled Eggs, world-music experimentalists Mayadeen and the free improv A Trio. The new project immediately released its debut Beach Party at Mirna el-Chalouhi, which was consequently a crude amalgam of punk, krautrock and free jazz elements.

On the band’s new self-titled album the focus of the music has shifted towards more composed elements even if there is a lot of space for improvisation parts. Or as the info sheets suggests: more control that may allow more freedom. The nucleus of the band consists of Charbel Haber (g), Tony Elieh (b), Raed Yassin (keyboards and synth), Malek Rizkallah (dr) and Lebanese star trumpeter Mazen Kerbaj, who can also be heard on all kinds of different instruments like plastic trombone, mizmar and crackle synth. The result is a real eclectic collection of styles.

Nevertheless, there are certain elements that are characteristic of the music on this album and one of these ingredients is repetition. Often the bass plays minimal riffs (“Feed the Hostage“), arpeggios (“Bedo’s Lullaby“) or drones (“In Praise of Habra“) again and again, sometimes the organ and guitar support these riffs with similar lines. The other main ingredient are the various sound colors which are scattered into the brew. Especially in “Bedo’s Lullaby“ weird synthesizer splitters, broken guitar chords, helicopter sounds, lost vibraphone notes and trumpet croaking create a noisy ambient universe, while in “In Praise of Habra“ an uncomfortable atmosphere of spookiness and gloom is conjured.

On “BBQ in Karantina“, a bonus track which is not on the vinyl version (but on the download), organ and drums dominate, in general the track is a feedback rock explosion that reminds of psychedelic rock bands of the early 1970s. This impression is intensified by the best track, “Feed the Hostage“. Here Mazen Kerbaj’s trumpet flows elegantly over the psychedelic haze of open guitar chords and transparent drumming. However, the piece changes in the last part, when a Deep Purple riff, which clearly reminds of “Child In Time“, starts to dominate and the mizmar (an Arabic reed instrument) even imitates Ian Gillan’s vocals.

Listen to parts of the album here:

You are doing god's work by highlighting such awesome music, one of your stars seems to have gone amiss though :p

Really nice, jdogsby. But I have to admit that I came across this album by pure chance. As a vegetarian I thought the name of the band and the cover seem to be interesting, I had no idea what they sounded like. For the rest of the day I keep enjoying myself thinking about what "god's work" might look like. Thanks for the nice words.

thank you martin for this nice review. i just saw it now.
one comment: you forgot to mention the other guitarist of the group, sharif sehnaoui, who is responsible for many "percussions", drones and eruptions on that album.
(and glad to have met you in person yesterday!)
mazen kerbaj