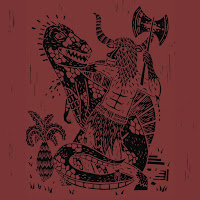 Virginia Genta & David Vanzan form the musical collaboration known as Jooklo Duo, often playing as a drums and tenor duo, but regularly branching out to include others, with their arrangements going from trio to up to octet and beyond.  They are either the most psychedelic jazz band in the world, or the jazziest psychedelic band, and only a handful of their releases could be placed in one category alone (Where Has Jazz Gone? Is a great one if you want to catch their jazzier side, Peaceful Messages is a good one for the psychedelic feel).  This record touches on a lot of different things, and the Jooklos seem to be in a more supportive role here.

John Wesseltoft is another musician who jumps around genres, but is at his core is a (free) improviser.  I had come to know him from his work with C. Spencer Yeh and Okkyung Lee, if that tells you anything.  Here he plays a very loose version of electric guitar.

And finally there is Dag Stiberg, and this was my introduction to him.  A Norwegian altoist, Stiberg’s online bios have him playing in a number of bands that range from free improv, metal, psychedelia, to noise.  As such, he is what we would think of as the post-jazz/modern saxophonist, and from what I can tell this record most reflects his approach to improvisation.

I say that because the record title, “Det Kristike Punkt” is Norwegian, just like Stiberg.  Also, he seems to be given the lead on most of the album, with the intenseness of the recording seeming to fit very nicely into his discography.

Det Kristike Punkt means “The Critical Point” in English, and I think this record takes that idea to the extreme.  Rather than being that one moment that everything builds to, that moment of urgency, it is stretched and expanded, repeated and deconstructed.  It’s not a single moment here, but rather a continuous flow of equally critical points, an instant and sustained immediacy.

The opener demonstrates this ably.  Vanzan is lightly playing the cymbals, creating a kind of rolling, continuous drum din, and before you know it, Stiberg starts attacking the air with pointed, choked notes.  His improvisational style here is harsh in general, with him seeming to take a deep a breath as possible before sending out a deluge of notes into the world, until his lungs say, “enough!”, at which point he takes a break to re-inflate and goes right back into it.  It sounds exhausting, and of course it is noisy, and because of the high register he is playing it is harsh, but that is not to say it is without technique.  I would not say it is melodic, but it is tonal, and it does establish a hypnotic repeated pattern that sucks you in.  Aside from Ayler, I can’t think of many free jazz artists that used repetition techniques in their solos, but Stiberg is not just a free jazz artist.  It is reminiscent of the layered techniques of repetition used in psychedelic and experimental music, with a harder, freer edge.  The guitar comes in and it is a dirty, fuzzy tone, often played with both sustained and piercing notes, or as a furious, repetitive stream.  Genta’s tenor starts to add counterpoints with its languid, lyrical phrasing.  As some of the other instruments become undiscernible from each other, Genta’s sax sounds like a tugboat sounding its horn through the fog.  It borders on overstuffed at some points, but as described, the instruments all play different roles, helping to distinguish what is going on and creating very purposeful collective improvisation.  It’s not just everyone playing like maniacs over top of each other, but that happens sometimes too, thankfully).

This is the basic framework for the record, though it also features moments of more third-stream type playing, where Genta picks up a melodica and develops great interplay with Stiberg on his Khene (a sort of pan flute looking instrument).  There is a lot of sparseness, especially in comparison to the jam-packed sections, with some well taken moments of silence.  It also further confirmed to me what a talented drummer Vanzan is, picking up the percussion and sleigh bells and just laying down a thick atmosphere of percussive sound for the others to traipse through.  The Jooklos being the artists I am most familiar with, I can also say that Genta’s saxophone technique has definitely developed and expanded since I started listening to them, and I am impressed with the playing on this record.  Wesseltoft also can make his guitar sound like whatever he wants, with floating, almost ambient and barely strummed walls of texture throughout the quieter parts.  Stiberg also shows range, by going from the choked, repetitive soloing to longer, less powerful but more dynamic playing, and of course shows even more range in taking on different instruments and styles.  His improvjazzmetalpsychedelicnoisesaxmadman reputation I read about online definitely comes across here.

So, I highly recommend this record, but with the caveat that you better like your jazz noisey, or your
metal jazzy, or your mellow harsh.  I could say that it lacks composition, or the solos aren’t defined, but that would be unfair to the spirit of the adventure.  The ideas do seem to run short, and the way it is put together seems like a serious of vignettes that aren’t really related, but in those moments of infinite critical points, it does exactly what it intends to do, without any restriction or limits, and by god is it cathartic.
Paul on Tuesday, March 29, 2016
Share

I'd love to hear some more reviews of Genta and Vanzan! Thanks to this post, I searched out the "jazzier" recording mentioned, and the "psychedelic" one, and they are both great!

Discogs.com shows a literal boatload of recordings in various groups/ensembles.

If anyone can recommend anything else, please let us know!

Thanks, Mike! I will certainly be on the lookout to review more Jooklo related releases as they are quite prolific (and good). Virginia Genta has a 7" of solo sax coming out on Holidays Records that I will be looking to review, and there should be plenty more after that, too.

If you're in the US they are playing here in June, and they play Europe frequently with any number of musicians across genres.

They have TONS of releases, but in the last few years I've enjoyed:

I think they've progressed a good bit since some of those early duo recordings, the playing gets more dynamic in the later releases. Oh, and if you like the Jooklo Quartet stuff with the Finnish musicians check out Mohel, a Finnish group that features most of the same players. Their stuff is INSANE. Anyway, enjoy!