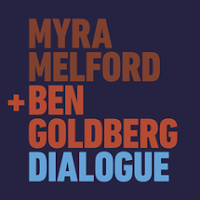 For those wanting to hear an expertly crafted, meticulously performed set of intimate improvisations, here you have it.  Pianist Myra Melford and clarinetist Ben Goldberg, who’ve collaborated in the past several years in Melford’s Be Bread ensemble and Goldberg’s Orphic Machine, work together here to produce thirteen remarkably diverse, carefully structured pieces that bear ample testimony to the players’ ability to coalesce in producing a shared musical vision.

Melford has for years distinguished herself as a pianist capable of stunning technical feats on the piano while also offering a sensitive, yearning melodic voice; she can switch instantly from fiery onslaughts to delicate, clarion-like passages.  Here she sticks mostly to a more understated approach, without as many overtly show-stopping gestures, in an effort to seek out points of contact with Goldberg, who is a dynamic and inventive presence on clarinet.  While there seem to be a few freely improvised moments on the record, the overall emphasis is on the players’ compositions.  Five are Goldberg’s, the other eight Melford’s.  It is perhaps a sign of the musicians’ close rapport that the pieces really have the same characteristics: a strong melodic core, with abundant opportunities for Melford and Goldberg to tease out the implications of each tune, but without any wasted notes. There’s no meandering here, waiting for something to emerge; the strong compositions result in pieces that are tightly focused and purposive.

For an album that is so cohesive, there are a number of contrasting stylistic touches.  “Your Life Here” starts with a subtle, almost danceable rhythmic structure just underneath the surface, with Melford’s single-note passages keeping the pulse going throughout and Goldberg offering rhythmic counterpoint, until gradually tapering into a quieter section with Melford’s crystalline arpeggios supporting Goldberg, who develops a beautiful melodic figure to bring the piece to a close.  “The Kitchen” is a more unfettered exploration, displaying Melford’s keyboard scampering and Goldberg’s ability to float above the flurries, in the process getting a chance to develop his own impressive runs.  “Chorale” is a gorgeous, deliberately-paced hymn, showcasing the lyrical side of Melford’s composing.  And for those seeking out examples of each player’s dazzling reach on their instruments, look no further than “City of Illusion,” with razor-sharp upper-register passages from Goldberg and some mighty impressive runs from Melford, with just a bit of that percussive punch that she can offer up whenever she wants to.

For two improvisers who’ve been devoting a lot of their creative energy to group work, this is a potent reminder of the value of scaling things down every once in a while.  There’s much to admire and to savor in this first-rate record.