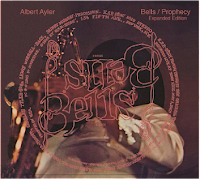 Albert Ayler had always been somewhat abstract to me. From my earliest exposure to his music via Marc Ribot's Spiritual Unity group to Ayler’s own later albums like New Grass, he was an enigmatic figure. Starting off with his uncompromising and harsh tones - to newbie ears - he presented an extra challenge to grasp.

While over time I have expanded my knowledge of Ayler's discography, it was through Ekkehard Jost's slim but dense treatise Free Jazz (1974), which has a dedicated chapter to examining Ayler's music, that I finally had felt a better grasp on who Ayler was to free jazz. His building block materials: rhythm and blues and spirituals came into stronger focus, as did his career's European beginnings. Interesting too were Jost's thoughts on how Ayler's own reductionist approach to his music - an ever simplification of form and complexity - became a liability later on in his foreshortened career.

Jost's thoughts aside, Bells was recorded at an apogee for both free jazz and Ayler, and it was another visionary, the late ESP-Disk founder Bernard Stollman, who brought Ayler to the masses in the early 60s. Bells was recorded live at NYC's Town Hall on May 1, 1965. The seminal recording was released as a clear one-sided vinyl because apparently Stollman was so excited that he didn't want to wait for more music to be recorded. The personnel on the date was Ayler on tenor sax, his brother Donald Ayler on trumpet, Charles Tyler on alto sax, Lewis Worrell on bass, and Sonny Murray on drums.

The slingshot-like theme at the beginning is a new version of “Holy Ghost“, Ayler’s contribution to The New Wave in Jazz sampler (Impulse) before a short bass solo by Worrell makes the transition to a new part (the real “Bells“, so to say) which indeed points into the new direction Ayler was to take in the next years. The rhythmic and harmonic material and the structure recur to European and American marches and the composed parts consist of several contrasting segments which separate the reed solos. In general, the solos are relatively short so that the focus shifts to the thematic material. As a result, it’s not individual sound exploration but the collective which is at the heart of the music. To me, the original is pure emotive playing, raw and difficult to new ears but comforting to broken-in ones.

Bells is being re-released along with the live album Prophecy which was first issued in 1975 but taken from a summer 1964 trio gig with Gary Peacock on bass and Sonny Murray on drums, which was recorded by the poet Paul Haines in New York’s Cellar Café. On the second CD the original five tracks of Prophecy are augmented by six more from the same concert, which were released at some point as Albert Smiles with Sonny on various labels. Even if it is not as famous as Spiritual Unity, this earlier trio date is well worth a listen or revisiting. Repertoire and improvisational attitude resemble the “Spiritual Unity“ sessions and there is a real exuberance to the group’s playing on the live tracks. Once again we can witness that it is Gary Peacock who finds the right balance between a sonorous foundation and energy playing with his virtuoso runs in the high register, even if the mix puts him too much in the background. Hardly any other bassist was as good a match for Ayler's music. Sonny Murray adds his typical dense textures, his transparent, light-footed style contrasts Ayler’s muscular solos perfectly. Playing around themes such as “Ghosts“, “Saints“ and “Spirits“ (which make multiple appearances in the sequence) you can hear a group that had grown strong and we're starting to split apart at their musical seams foreshadowing the expanded instrumentation of Bells. Then again, one has to be really careful with the titles. “Wizard“ on this album has nothing to do with “The Wizard“ from Spiritual Unity, in fact, it’s a different version of “Children“ and “Ghosts - Second Variation“ is a second version of “Spirits“. And last but not least, one also has to mention that the additional six live tracks don’t have the same quality as the first five ones.

So, no, no new material, but a solid repackaging of Albert Ayler’s music.

The album is available as a download or as a 2-CD set, this is a re-release worth tracking down. I'd recommend the physical set, it's handsomely packed with current label manager and critic Steve Holtje's liner notes, and will look great on your overflowing shelves.

(I didn't put a star rating on this review, that would be madness)