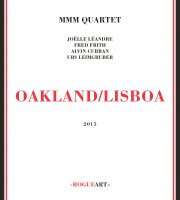 Jazz is probably the most scrutinized music in the world.  Not necessarily by the media or public at large, but one would be hard-pressed to find the same level of debate within the fans, players, and historians of another genre, mostly asking the metaphysical question of “what is jazz?”.  This has to do with many factors, mostly how jazz originated as a truly American, truly black art form that came out of the bonds of slavery, and how far it has come since then, how it has branched out musically, and how it has been consumed and reinterpreted across cultures and social classes since that time.  Adding to this is the serious nature in which fans and players analyze the concept and technique behind a recording, which, if not more profound, is definitely more esoteric than most genres of music.  Even within free jazz, we have certain (false) dichotomies that have been created since the likes of Ornette Coleman and Albert Ayler birthed the concept.  Typically this has to do with the impetus behind free jazz, which in its infancy was mostly a response to the restrictions and staleness of post-bop paradigms, but in equal measure the rejection of the status quo of society, black empowerment, and cultural revolution through the freedom of expression.  On the other end of the dichotomy is what is commonly called European creative music, which some have taken as a sort of cultural appropriation, or at least less genuine than the free jazz being played in New York lofts during the 1960’s.  There is also the idea of the “white hanger-on” being less talented, more content to skonk and screech with no purpose or ethos, making wanky, long jam sessions that do nothing but satisfy their own neurosis.  As I implied before, I find this to be a false dichotomy and in reality the people who argue along these lines aren’t really serving any purpose for anyone except to satisfy their own egos (in my opinion), especially some 50-60 years after the fact.  Jazz has not died and it probably never will while music is still being made, at least in spirit and in the development of improvisation techniques.  Everyone is entitled to their personal opinions about certain music, but to write it off for some perceived lack of authenticity because it’s been analyzed too narrowly is not helping anything.

As I had recently read an op-ed dismissing the genre of free improv as generally talentless “white hanger-on music” (whereas third stream was the writer’s chosen authentic form of looser improvisation), these and other thoughts popped into my head as I listened to this album, which is quite comfortably in the free improv column.  This is probably the one (nebulously defined) genre that receives most of the criticisms I’ve described above.  Sometimes records in this vein take themselves so seriously that they come off as almost laughable in their pretense, others are so cheeky in their approach that they make the listener feel like the butt of a joke, and others still are just a woman playing “tenor balloon” (I love you Judy Dunaway!).  It’s often the kind of stuff that has detractors of the genre painting its musicians and fans as taking themselves way too seriously, but those who follow the genre know that there are incredible displays of musicianship and passion to be found on many recordings.

So, I had these thoughts swimming around in my head as I sat and listened to MMM Quartet’s album Oakland/Lisboa from Rogue Art records.  I can’t say that I like all free improvisation, or that it sometimes doesn’t feel like a huge exercise in pretense, but this is not the album for that.  This is a barrel load of talent, passion, technique, and most importantly FREEDOM.  I think that the creative music that spawned from free jazz was the natural progression, and that while the original free jazz that spawned in America is incredible and life- affirming in so many ways, it’s not something people should try to mimic ad infinium, which would obviously be against the spirit of free jazz in the first place.  Our need to define and categorize things can sometimes obfuscate the simple beauty of those things we take for granted because they don’t fit neatly into a specific box.

I’ve already gone on too long of a rant without saying enough about this album, but its all here.  Yes, the band is irreverent (MMM stands for MillsMusicMafia, obviously tongue-in-cheek), but the music is as serious as it gets without being self-important.  You have, in my opinion; four of the best musicians in the world in this genre, who together have an incredible understanding of each other’s playing.  For a live free improv performance you would think that this had been expertly mapped out beforehand.  Leandre seems to know exactly when to pluck her strings or when to saw right into your head with her heavily bowed double bass.  Fred Frith is the best non-traditional guitarist ever, I assume.  On this record, he makes just the sound of plugging in an electric guitar (leaving the cord touching the input but not quite fully plugged in, creating a droning electronic squelch) sound like art.  It sounds like something anyone could do to the untrained (like those parents who think their kids can paint as well as Picasso or Pollack), but it’s about knowing the players around him, understanding space and timing; it’s not easy yet he pulls it off impeccably.  Urs Leimgruber adds so much texture through unorthodox playing of his saxophone that makes it sound more like a tenor balloon (I still love you, Judy Dunaway!), before he provides crucial counter points with melodic phrasing during the noisier moments of his compatriots.  Alvin Curran is most recognizable as the one playing a traditional instrument, his microtonal piano runs cutting through the fog at crucial times.  On the other hand, his sampling and electronics work provides immense layers of dense and tough to distinguish sounds, adding a large amount of textural and dramatic elements.  They do all of this for a long time, never losing steam, never running out of ideas, morphing in and out between tonal playing and pure texture, between cacophony and silence, showing their virtuosity one moment before deconstructing the idea of a musical instrument the next.  It’s not just thought provoking or ultra-progressive, but enjoyable, fervent, and well made.  Dividing and categorizing art, trying to fit it into neat categories, and then judging it based on how it fits into such categories is not what anyone remembers.  Records like this are what people will remember, and most importantly, what will continue to push other musicians to progress, take risks, and build an ecstatic community based on freedom of expression.  As a fan, one can’t ask for much more.
Paul on Thursday, April 21, 2016
Share