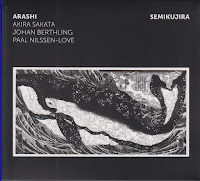 A couple of years ago Akira Sakata, a powerful saxophone player who has been on the forefront of Japan’s free jazz scene since the early ’70s, teamed up with Johan Berthling and Paal Nilssen-Love, each one part of some of today’s best rhythm sections (Fire! and The Thing, respectively) and both tireless musical explorers. The result was the record Arashi, that true to its title (meaning "storm") presented a band with a huge, powerful sound, but also capable of a variety of different moods, and despite recording together for the first time they already showed clear ideas and a strong interplay. This new album picks up from there and further develops the same discourse, mostly working on the band’s strengths but also looking for new formal solutions. In the meantime, Arashi has become the name of the band, and the time passed touring together had a clear effect on the ensemble sound, making it even stronger and more cohesive.

The first track, Snowing on the Temple Garden begins with a sparse base of bass, bells and percussions, over which Sakata evokes the atmosphere described by the title with a beautiful, understated theme on clarinet, creating a tangible tension that prepares the ground for the rest of the album. The following Blow of Humpback Whale returns to more familiar terrains, with Berthling and Nilssen-Love providing an explosive free jazz vehicle for the fast winding lines and high register cries of Sakata’s alto sax. Saitaro Bushi, based on a traditional Japanese song, opens with a fast dialogue between bass and drums, soon joined by the wild, theatrical vocals of Sakata, screaming over the free rhythm base, then picking up the alto sax for one of the most intense solos of the album. The following section features a bouncing drum solo leading to a layered coda of reverberating metal percussions, revealing a perfectly calibrated compositional structure. Again Sheep Said “Wolf is Coming” is another showcase for Sakata’s vocal explosions, a chaotic intermission before the more nuanced final track. Semikujira (Right Whale) begins with a passionate, blues-tinged solo on the alto over a steady percussive base of single drum hits that recalls Japanese ceremonial music. The performance then slowly morphs into an intense free jazz excursion, with solo spotlights for all the musicians, before returning to the sparse atmosphere of the beginning, with Sakata’s lyrical playing flowing over the textural backdrop of bass and percussions until the album ends with another high energy collective exchange.

Semikujira is a major new addition to these musicians already vast discographies, and one of the most satisfying listens of the year so far – a powerful, thoughtfully constructed work that blends familiar but disparate musical dimensions into a convincing whole, while preserving the spontaneity of instant creation. The same qualities are mirrored on the cover artwork, an apparently traditional illustration (by Sagaki Keita) that on closer inspection reveals a quirky, irreverent world of strange creatures.
Highly recommended.