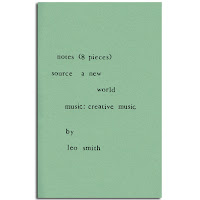 notes (8 pieces): source a new world music: creative music by Wadada Leo Smith was originally self-published in 1973 in a run of 200 copies. The current edition was reprinted in an edition of 1000 by Corbett vs Dempsey to accompany the exhibition Wadada Leo Smith - Ankhrasmation: The Language Scores, 1967-2015 presented October 11-29, 2015 at The Renaissance Society of the University of Chicago.

notes is (or was) Smith’s attempts to lay down his philosophy as an improviser. After the dedication and a quote from Addison Gayle, Jr., the first we see of Smith’s writing is an afterward as prologue, which makes a lot of sense for this book. A description of the AACM follows, covering the organization’s goals, history, and educational programs. “The contribution of the AACM to creative music is in evidence throughout the musical world” is just as true in 2016 as it was in 1973.

CREATIVE MUSIC (one of the few uses of capital letters in the text), thoughts from an improviser, and (sources) a new world music: creative music the improvisors & improvisation all lay bear Smith’s ideas of what it means to be an improvisor/composer, the history of creative music, and how to keep this music alive in the future. Smith’s take on the history of this music alone is worth the price of the book.

notes on my music (parts 1-3) close out the back portion of the original text. The first sentence is a perfect description of the role of each performer in Smith’s music:


the concept that i employ in my music is to consider each performer as a complete unit with each having his or her own center from which each performs independently of any other, and with this respect of autonomy the independent center of the improvisation is continuously changing depending upon the force created by individual centers at any instance from any of the units.

Part 1 continues into more specific aspects of Wadada Leo Smith’s music, a discussion that is continued in Part 3. Part 2 might be my favorite passage in the book, discussing the role of heritage, nature, and spirit/wholeness that powers creative music. It certainly feels like the most emotional section of the book.

After the original 1973 text, there are a few new additions from Smith written in the last few years, as well as an afterward from both Smith and publisher John Corbett. The book itself, as an object, is wonderful. A facsimile of the original, the ribbed lines of the pages, the darkness of the ink, the heft of the cover, provide a physical weight that balance the weight of Smith’s ideas. I keep touching it, hoping to absorb the ideas through my finger tips.

The philosophy laid out in these pages is too deep to dig into in a short article. I’ll be thinking about these ideas in one way or another for a long time to come. notes is an essential text for anyone interest in creative music. It’s a good thing this is available again, the ideas expressed here will be a great asset to any performer or listener and hopefully will help play a major role in the future of our music.

Buy the book from the publisher.

More information on the exhibit.


Note: In line with Smith’s views on criticism expressed in the text, no star rating is provided.
Paul on Sunday, May 22, 2016
Share