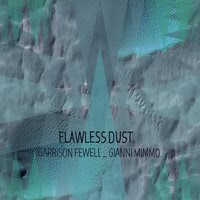 Last year Inverso, the album of duets by Garrison Fewell and Alessio Alberghini, was my top pick of the year, and completely coincidentally the review of this album was posted on the day that Garrison Fewell sadly passed on.  As a wonderful guitarist, Fewell was an expert accompanist, giving just the right support to those he played with whilst allowing them the space to soar and sound magnificent. He was also an outstanding soloist and could easily traverse the line between playing standard material as well as more out-there excursions and flights of fancy.

It is therefore very satisfying to welcome another set of recordings into the canon of his work.  Flawless Dust is another set of duets and another chance to hear this late and great guitarist in an intimate setting, this time with soprano saxophonist Gianni Mimmo.

The album starts with the title track, and the same subtlety that the Inverso pieces had, with Fewell bobbling and sliding a ‘found object’ on the open strings of his guitar, whilst Mimmo gradually enters over the course of the piece initially with multiphonic tones that sound more akin to electronic feedback.  These then blend with the notion of the electric guitar and the expectation of it, whilst creating a sustained contrast to Fewell’s higgledy-piggledy sounds.

In contrast to this is the next track ‘Song’, with Mimmo playing a free melodic line whilst Fewell accompanies underneath with some quick and choppy chords played chromatically in progression, before providing an atonal countermelody to Mimmo’s.  Having moved from sound based improv, with emphasis on texture, we now find ourselves in a short and traditional piece, in the sense of melodies, harmonies and instrumental roles that are liberated from tonality in its strictest sense.

These points, just from these first two tracks seem to create stylistic markers for the album, with subtle and discreet playing, textural based improv and explorative melodic passages forming the key areas within the music.  Flawless Dust consists of ten tracks of variable length, from the short and concise nature of “Other Chat” at just over a minute to the fourteen minutes of “A Floating Caravan” with its sparse nature of exotic sounds that conjure up the image of a slow trek through an arid desert, with added percussion in bells and Mimmo producing flute-like tones, whilst Fewell plays his guitar more like a hammered dulcimer.

Flawless Dust is an interesting and creative set of dialogues that are both fluid in their execution and uncompromising in their direction.