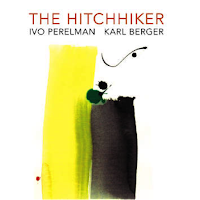 Notably absent among the recent avalanche of Ivo Perelman releases covered on this blog was 2014’s Reverie, Perelman’s first recording with Karl Berger.  Berger, longtime partner of Ornette Coleman (the two founded the Creative Music Studio in the 1970s, a training ground for a generation of free-oriented musicians), is known for his work on both the piano and the vibes.  On Reverie he played piano, and the resulting set of duo performances with Perelman was noteworthy in bringing to the surface the gentler, contemplative side of Perelman’s playing.  As many have pointed out, that aspect of Perelman’s voice on the tenor saxophone is rarely completely absent, although in a lot of his earlier work it was obscured a bit more by his overwhelming exuberance and stunning technique.  Berger’s lush harmonic figures and intricate passages were the perfect vehicle for Perelman to channel the emotion of his playing more consistently into more introspective, subtle pathways.  For this listener at least, it’s Perelman’s use of space and his articulation of a sense of profound mystery that characterize much of his most interesting recent work and which can allow for new insights into this remarkably productive phase of Perelman’s already prolific career.

This is abundantly evident on this release, now with Berger on vibes.  Berger’s expansive range of stylistic approaches on the instrument always keeps things interesting—sometimes a jaunty ostinato phrase used to support Perelman, as on the record’s opener, “The Shadowy Path,” or on other tracks more direct interjections, as we hear later on the record in “Zen and the Art of Improvisation,” where Perelman and Berger engage in a mutual development of ideas, in a mere two minutes, that is a model of what spontaneous improvisation can offer.  And sometimes it’s just a few shimmering notes, allowing for the mystery in Perelman’s playing to emerge fully, as on the captivating second track, “The Well of Memory,” a marvelous display of Perelman’s yearning, patient development of his ideas, sometimes with just the quietest of flutters or a few languid phrases, drifting away before one realizes it’s gone.

Perelman’s own range of expression on these eleven tracks is astonishing.  He has by this point in his career truly become so expert on his instrument that he can do virtually anything – and this frees him to use his fearsome technique in the service of his broader agenda, as he no longer has anything to prove.  The amazing altissimo passages are still there (witness his flights midway through “The Shadowy Path,” if evidence is needed!), but they are so thoroughly, organically a part of his musical vision that it’s easy to forget just how talented Perlman is.  Instead, one just finds oneself carried away on the tide of the music, going wherever Perelman wants to go, and simply enjoying the ride.  And there’s a great deal of enjoyment to be had here for fans of improvised music.  A superb release!
Paul on Monday, May 30, 2016
Share