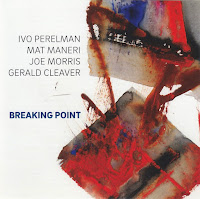 Breaking Point is a notable entry in Ivo Perelman’s catalog, not just for the musicianship displayed, but for featuring the line up of two front line players, Perelman (saxophone) and Mat Maneri (viola), supported by the excellent rhythm section of Gerald Cleaver (drums) and Joe Morris (bass). In Perelman’s extensive discography this is only his third session as leader to feature this type of line up, though the group functions as one unit in contrast to the idea of melody + rhythm the instrumentation might imply.

I imagine the readers of this blog don’t need an introduction to these four excellent musicians as they’ve all been performing this kind of music for a long time and it shows in their ability to listen, connect, and react to each other. The album is fully improvised and presented in “largely the sequence as we played it in the studio.”

My favorite are the final two on the album:

“The Forest Of Feet And Bass Drums”

Detached short phrases slowly give way to increasingly long lines underpinned with wonderfully rumbling percussion and buoyant bass. Just as the activity starts to ramp up, Morris takes a solo accompanied by Cleaver’s ebullient drumming. When Perelman and Maneri join back in, their lines intertwine and support each other beautifully, passing ideas back and forth as they alter and distort each other’s thoughts. At times it’s difficult to separate their voices as they are so closely entwined, like a heaving den of snakes crawling on top of each other. Cleaver’s drum solo is a highlight. Lasting just over a minute, Cleaver spins his way through a beautiful solo that transitions into a much sparser group improvisation to end the track.

Long legato lines endlessly spinning, setting in motion a piece that slowly builds enough gravity to create it’s own universe. Its lovely to hear the arco work of Morris blending with Maneri and Perelman. As the piece adds energy to the darkness of the opening, Morris switches to pizzicato, pushing the band forward. The moment when Maneri and Cleaver drop out is magical, a strong reminder that not playing is sometimes (maybe even often) the best choice a musician can make. Cleaver sneaks back in, supporting the duo of Perelman and Morris, before Maneri interjects himself back into the reaction taking place. Over the course of the improvisation the energy builds to explosive levels, but the music becomes sparser, turning inwards. The expected supernova instead implodes, leaving only the echoes of Maneri’s bow skipping across his string.
Paul on Tuesday, May 31, 2016
Share