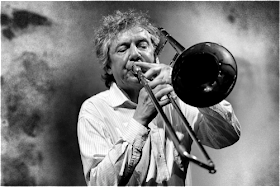 It’s sad news that Johannes Bauer has passed away. With his older brother Conny, he was one of the most prominent figures of the free jazz scene in the former German Democratic Republic. As a young man, he’d already released albums on the legendary FMP label, among them outstanding releases with the Manfred Schulze Bläser Quintett (Nummer 12), the Conny Bauer Quartet (Round About Mittweida) and the Heinz Becker Group (Pan - Vielleicht Tau). Later, he had great bands like the Tradition Trio (with Alan Silva and Roger Turner), Grid Mesh (with Frank Paul Schubert, Andreas Willers and Rudi Fischerlehner), Freeter (with Tobias Delius, Clayton Thomas and Martin Blume) and the exceptional Doppelmoppel (with he and Conny on trombone and Joe Sachse and Uwe Kropinski on guitars). I liked Johannes Bauer best however, when he was part of large ensembles. I first saw him when Peter Brötzmann celebrated his 50th birthday in Wuppertal in 1992, a performance which ultimately won me over to free jazz. As a part of Barry Guy’s London Jazz Composers Orchestra he played “Harmos“ at the Jazzfestival in Schaffhausen in 2008 and I‘ll never forget his duel with his brother Conny at the beginning of the piece. Those who were able to see him with Peter Brötzmann’s Chicago Tentet +1 at their three-day-residency in Wuppertal’s Café Ada in 2011 will always remember how passionately he swung with Fred Lonberg-Holm, how much he enjoyed the music, the obvious fun he had playing. Johannes Bauer was my favorite trombonist. Today he has lost his fight against cancer. He’ll be missed by all in the jazz community.

Here‘s an excerpt from a Bauer 4 concert - with his brothers Conny (tb), Matthias (b) and his nephew Louis Rastig (p):

One of the greatest improvisers and such a nice guy. Always thought about having a group with him... I am otherwise speechless at this news. Think I have to go play for him and help send him on his way.