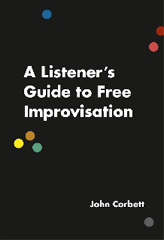 Free Improvisation is and probably always will be, fringe music. As a general rule, a fringe or counterculture either fades away or becomes absorbed into the mainstream, as brilliantly portrayed in the closing scenes of the TV series Mad Men. Not so with free improvisation (and its close relation, free jazz). The only other instance of which I can think of a counterculture that’s resolutely remained as such, is the Amish. Go figure.

The reasons for its lack of popularity are easy to discern, but what’s the appeal of free improvisation – what is it that continues to fascinate and stimulate musicians and audiences about music-making that can seem wilfully marginalised, and how should you go about listening to it? It’s to this question that John Corbett’s book is addressed.  Corbett is a well-known critic and writer, who teaches at the School of the Art Institute of Chicago and is also co-proprietor of the art gallery, publisher and record label, Corbett vs. Dempsey.

This is a slim book, written in a breezy tone, free of jargon and impenetrable prose masquerading as profundity. Corbett is keen to demystify, making the music sound more accessible and less intimidating, often a bar to new listeners. At various points he uses the analogy of bird-watching, which doesn’t require you to be an ornithologist, and where repetition and accumulated knowledge count for a great deal. This provides useful comparisons with the business of listening, though he accepts the analogy can only be taken so far.

There are introductory remarks on taxonomy, distinguishing free improvisation from structured improvisation, free jazz and noise music, distinctions easy enough to make on paper but due to overlap they’re rather more difficult to apply when listening and ultimately are of little practical benefit; once understood they’re probably best discarded. There’s also a curious rejection of “improv” – “I never use the abbreviated form of improvisation” says Corbett “Improv is for improvised comedy, a particular and separate artistic activity”. Outside of the Comedy Store, it’s difficult to see how anyone could really confuse the two.

What Corbett recognises is that getting to know any new area of music requires adjusting listening habits and managing expectations – what to listen for and what not to carry over from other idioms – and focuses on a number of fundamentals, essential to grasp when coming to terms with improvisation. It’s a rewiring of parts of the musical brain which can’t be achieved with the flick of a switch. In respect of rhythm, don’t expect regularity and metric pulses. It’s a matter of motion and velocity rather than tempo. As Corbett puts it:


“Once you relax, let down your guard, and pay attention to all the minute rhythmic details – the flux, the freeze-frames, the tasty timings – you can move deeper into improvised music. If you cling to the desire for a beat, you’ll forever stand at the front door.”

We live in a time when most of the music listened to is in song form, music having a clear arc between opening and closure: we know pretty much how long it’s going to last. With improvisation musical duration is more open-ended, often with no real sense of beginning, middle or end, which has two consequences. We have no real idea how long each piece or section will last – the music unfolds according to its own time – and on occasions, listening only to part need not be a bad thing, allowing digestion in bite-sized pieces. It’s not always possible to maintain full concentration, particularly when finding one’s feet: it’s better to come to terms with music little by little than be confused by the whole thing. Like the musicians, the listener has choices. Before the advent of CD, recordings of improvisation were sometimes edited down to fit onto an LP but with no loss in musical quality, just the amount you got.

In addition, what can be forgotten is that performances vary and the quality of playing is not necessarily at the same level throughout. Free improvisation can be a high-risk strategy: music without a safety net, and only the mediocre are always at their best. Like all musicians, improvisers can coast – what Corbett describes as “cosmetic” rather than “real” improvisation – until something ignites the spark.

Corbett then moves on to some of the more active components of listening. Here and elsewhere, the backdrop is attending a performance but of course, unless one lives in or near London, New York, Berlin or other major centres, they’re hard to come by, and I’d go far as to say that even regular attendees probably listen to more music via recordings than gigs. This doesn’t undermine the value of Corbett’s observations but identifying who’s playing what, the agency of sound, and how the players time their entrances and exits is trickier without visual cues. A suitable compromise would be YouTube, a valuable resource for improvised music. He also considers the subject of watching and listening and competing views of their importance: music as a form of social theatre against focussing on sounds as such, irrespective of who’s making them and how they’re produced. Naturally, there are merits to both; there’s no reason why it should be an all or nothing affair. (Incidentally, Corbett’s suggestion that one can process the music while fast asleep can’t be entirely serious though arguably, peripheral listening has its place.)

Perhaps the most important feature of improvisation is that the players occupy their own space with varying degrees of interaction, as well as none at all. The idea that it’s all egalitarianism is misleading. It’s music which reflects the whole range of personal and social relations – sometimes sympathetic, other times contrasting, even oppositional or disruptive – not something as narrow in scope as a musical bill of rights. Corbett gives examples of the different relationships, the kind of activity to listen for, changes in focus and the processes going on – dialogue, independent simultaneous action, imitation, consensus/dispute, support/stepping up, making space vs. being tentative, and counterpoint. The illustrations provided are sometimes musical, but are often by analogy with everyday activities with which we’re all familiar. In many respects, improvisation is the poetry of the prosaic.

It’s also about personalities – actual or assumed – and individual vocabularies, including our old friend “extended techniques”. Musically speaking, character is far more interesting than even-handed neutrality and inevitably, there will be those who appeal and others that do not. Corbett provides a checklist of major living free improvisers according to instrument (the contingency of living at the time of writing is one way of keeping the list of manageable size and presumably, is an encouragement to go and hear them play).

He also draws attention to the importance of dynamic shifts, not just changes in volume but in intensity, with suggestions of how to map out a performance by reference to such features. Focussing attention on particular facets is part of training our ears. Similarly with identifying transitions, where musical thought moves from one area, or set of concerns, to another. Regarding structure, he identifies the two principal forms this can take: the classical narrative of exposition, conflict and resolution (those who think improvisation is a rejection of all traditional forms should think again) and juxtaposition, non-goal-orientated music. I can’t agree with Corbett’s description of the latter as ”being stuck, static, not propelled forward, but staying in one place” however. Although true of some music, there are plenty of examples of nonlinear music which doesn’t have those features, both in contemporary classical music (of which he regards it as a legacy) and improvisation. As he notes, structure can be particularly difficult to identify and its importance can vary: often the music simply unfolds organically, like Paul Klee’s “taking a line for a walk”. Improvisation which is completely free does not lend itself to sophisticated long-term structures, at least where multiple musicians are involved; that kind of thing requires planning and some form of overriding organisation.

There are some theoretical musings on free will and determinism and how they relate to music, and the nature of improvisation containing composed elements (poly-free music) subjects that have led to the writing of much tosh elsewhere, and whose value in this book is largely down to Corbett’s concluding observations:


“…the term “freedom” has been the source of many misconceptions in improvised music, and it’s helpful to keep from investing in the word too deeply…in the wrong hands “free” music can be rallied around as a facile and softheaded notion…The point isn’t determining what’s free and what’s not. It’s time better spent paying attention to what’s going on in the music and how it’s made. Free is a method for making music; it isn’t an independent value or quality.”

This a refreshingly pragmatic book. Corbett is enthusiastic but not gushing, and open about his preferences (taste is a sign of a discerning mind) such as his fondness for threesomes – trios, over smaller or larger ensembles, and meetings of musicians familiar with each other over new combinations. There are lists of recommended recordings and books, though no online resources.

As a primer, it’s a valuable guide and even seasoned listeners will find it useful to be reminded what distinguishes free improvisation from other music and the kinds of things to which they should be alive. Like any music, it’s available to those prepared to devote the time and effort necessary to come to terms with its core features but it requires commitment and active engagement – like its practitioners, discipline – and its rewards are not easily won. Improvisation is music which is constitutionally ad hoc, sometimes feeling as if its parameters are defined afresh for each performance. The primacy given to process means it can lack the sense of completion or finish we tend to expect elsewhere, giving it the air of the ambiguous, provisional or incomplete: work in progress with everything laid bare. Like abstract art, it’s essentially a modernist enterprise, with its focus on originality and the renewal of forms. Corbett puts it in the following terms:


“…I feel strongly that free improvisation will eventually be seen as one of the great contributions of Western society to world culture, on a par with cubism’s introduction of multiple-point perspective or abstraction’s renewed attention to materiality and plasticity over observation and representation. What those early twentieth-century artistic concepts opened up in terms of image, vison and form, improvised music has cracked open in terms of time. It’s so much more than spontaneous outpourings of emotion or a brash proclamation that “I can do anything I want”; improvised music has contributed something deeply profound to the world, a new way of thinking about sound and space and temporal experience and personal interaction.”

As acknowledged by Corbett, there remains a sense of mystery at the heart of improvisation, for musicians and listeners alike, how impulse is transferred into action is something that cannot be put into words or explained in straight musicological terms. And that’s probably for the best. The sculptor Henry Moore was once sent a book about his work which considered it from the perspective of Jungian psychology. He stopped reading after the first chapter. For him, the fundamentally ineffable nature of the creative process was essential to what he did: to understand it would be to risk destroying it.

The book is available in paperback or, more cheaply, in electronic form which can be read using a Kindle app.
Paul on Saturday, May 07, 2016
Share