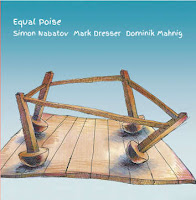 Following last year’s Projections, Simon Nabatov and Mark Dresser are back on record together in standard piano trio formation with up-and-coming drummer Dominik Mahnig. Equal Poise seems a cheeky name for this set of five rowdy improvisations; the stylized boxing ring depicted on the album cover is off-kilter and wobbly. Yet at the same time it’s perhaps in the album’s dynamic extremes that some sort of balance, ultimately, is achieved. On the one hand this repeated exploration of limits lends each track a seeming, superficial sameness. On the other hand, though, it makes each track—with some attention to detail—its own world worth inhabiting.

First up, “Full Circles” is itself built of ebbs and flows, advances and retreats. Nabatov has a knack here for creating drama by playing with proportion—he might build up tension and intensity gradually only to withdraw suddenly, or crash a quiet moment with a booming low-register chord cluster. Not that he can’t sustain sensitivity, but the most thrilling moments for me are when his playing leaves his band mates in its wake.

Given Nabatov’s intrepid power, while listening it’s hard not to think of the boxing ring album art or the blurb on the Leo site, which compares the music to a bout: “Push and pull, jabs and hooks, gloves on and off, circling around and direct engagement…” There’s certainly a physicality to Nabatov’s playing here—to Dresser’s, too—even a kind of avuncular bullying, given the generational gap between the two veteran players and the twenty-something Mahnig. Of course the drummer survives each round just fine. It’s the boxing ring itself—a space of structure and boundary, inherited codes and rules, not unlike the classic jazz piano trio configuration after all—that’s left bent out of shape, almost out of recognition.

Indeed, elsewhere the trio set their efforts toward cooperation and interplay. It’s no surprise that Dresser’s playing, whether textural or propulsive, makes a reliable complement to Nabatov’s. And while Mahnig isn’t afraid to experiment on his kit, at times he provides the decisive ingredient when the trio draws together rhythmically. One of my favorite examples of this is his perfectly stiff almost-groove over Nabatov’s two-handed pattern and Dresser’s eighth-note sawing near the end of “Minor Force.” And on the final track, “Lithe Moves,” the trio even drops in and out of some genuine swing—Nabatov flirting with some lithe indeed post-bop phrases, Mahnig working the ride and stamping out a crisp two and four. But to overemphasize these moments would be to ignore all the other wonderful, completely dissimilar moments of unpredictable discovery and tension. It’s in the balance of the two, again, that Equal Poise succeeds.
Paul on Monday, May 09, 2016
Share