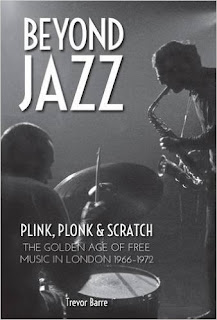 Now in its second edition, Trevor Barre's Beyond Jazz, Plink, Plonk & Scratch, the Golden Age of Free Music in London 1966–1972 is a nicely composed survey of the unique approach to free improvisation that came to be in London starting in the mid-1960s. Striking the right balance between entertaining and academically rigorous, the book is a pleasure to read and invaluable history of ‘Free Music’.

To begin, Barre lays out plainly how he came to appreciate this branch of improvised music. Like many of us, he arrived through the obvious channels of Prog-Rock and through the good fortune of being exposed in the 70s to a BBC radio show that programmed Free Jazz. As a dedicated listener and fan of the music, his thesis is focused more on the context and history of the musicians and players than a dissection of the musical components, which I believe makes Beyond Jazz an essential primer in the under-documented world of avant-garde jazz.

Barre hones in on the fertile years of 1966 - 1972 and adroitly builds his case for these being the exciting formative years of Free Music. This was the time when our heroes - John Stevens, Trevor Watts, Derek Bailey, Evan Parker, Barry Guy, Eddie Prevost, Paul Lytton, Keith Rowe, Cornelius Cardew and many others - we're embroiled in the zeitgeist of creativity, turmoil, and inexpensive living in London, and found their own approach to making music. Barre spends the first couple chapters setting the stage for Free Music - not Free Jazz - which he convincingly argues occupies a unique creative space, inspired by, but different than, the one mapped out by American musicians like Ornette Coleman, John Coltrane, Albert Ayler.  As the musicians, working somewhat isolated in Britain, traveled to the continent to play with their colleagues in Denmark and Germany. Back in London, they quickly developed a style that went beyond American Free Jazz (which still maintained traces of composition, pulse, and melody) by drawing upon more European and Middle Eastern sources, and removing the final element of composition by shifting the focus to textures, sounds and other elements of the musical experience.

The sound of Free Music can be initially alienating for many people, as the constituents of ‘proper’ musical sounds, as perhaps anticipated, are largely missing. Melodic refrains and anchors are not present, the music sounds chaotic and unanchored; there is no recognisable rhythmic foundation (at least initially) to focus on or to help one ‘get one’s bearings’. Sounds are at times harsh and discordant; the piece has no perceivable ‘direction’ or recognisable reference points; the musicians do not seem to be playing together, even to the point of their contributions actually seeming to clash; where and what is the end-point of this music? “A racket,” as my wife emphatically states with unchanging regularity. (p52)

The real meat of the book comes in the chapters when Barre digs into the history and influence of the Spontaneous Music Ensemble and the AMM, positioning them as the archetype of free music. Both groups were seminal in the creation of the British approach to free music and help define the careers of their respective rotating membership. The history of these free-thinking musicians and a scrappy DIY mindset is inseparable, as venues and engagements for Free Music concerts were limited, and the most secure work was found working outside of Britain. It was the creation and curation of the Little Theater Club by John Stevens, a take over in the evenings of a small theater in London, which served as an incubator for his ideas and the musicians surrounding the Spontaneous Music Ensemble and to some degree the AMM, as well as the brief but important gathering place the Old Place, that gave Free Music a base. From this, important ventures like Incus Records were spawned - the record label started by Derek Bailey, Evan Parker and Tony Oxley that gave us Topography of the Lungs, Iskra 1903 and Derek Bailey’s first solo guitar recordings.

A theme that is deeply woven is the importance of cultural and political conditions on the music - the post-World War II era gave folks like Stevens and Watts an opportunity and unorthodox training by being a part of the Royal Air Force band. Their time serving led them to make connections with musicians in Germany which proved to be influential and fruitful. Then, back in Britain, opposition to a stifling culture and expectations, led to this quiet oppositional music.

Throughout the chapters, Barre's research and personal communications with the founding fathers, like Evans, Guy, Watts, and Lytton, yield fresh insights and reflections that help deepen the appreciation of the contributions and sacrifices made in that heady era that led to the creation of a rich trove of music and influences that are still relevant today. Barre introduces the second and third ‘waves’ of Free Music musicians as well, presenting them as a direct heirs and contemporaries (many of the original musicians are still active, of course), these include second wavers: Lol Coxhill, Steve Beresford, David Toop and third wavers: Fred Frith, and John Butcher, John Rutherford, Mark Wastell, Phil Durrant, Radu Malfatti, Rhodri Davis, Shabak Hutchings and Dominic Lash.

My own knowledge of the SME and AMM was spotty, as my introduction to British jazz was through a high school fascination with Syd Barrett that eventually led me to the rock influenced Soft Machine, then to Nucleus, and eventually to John Surman and The Trio. These players all form an ancillary part of Barre's history, and certainly provide a gap in the literature for another enthusiast of the music. In fact, Barre's book could almost serve as a follow-up and update on musician and author Ian Carr's 1973 book Music Outside, which was a survey of the then very current avant-garde music scene in England.

Beyond Jazz, Plink, Plonk & Scratch, the Golden Age of Free Music in London 1966–1972 is a great primer and for those already well aware of the history, offers wonderful insights and anecdotes fresh from Barre’s painstaking research and personal communications. It’s available pretty readily in book and Kindle format.

The Free Jazz Blog has many reviews and musings on British Free Music, be sure visit or revisit some of these posts (in no particular order or level of completeness) and use the search to find more: