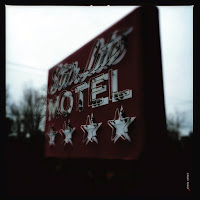 Awosting Falls is a 65-foot waterfall located at the Minnewaska State Park Preserve in New York. Upon searching for images of the waterfall on Google, it became clear that it goes through a range of states, a multiplicity of moods - sometimes it comes out in a trickle, with the whole resembling a gauzy sheet. Sometimes, it roars and churns, transforming from a gossamer layer to a grandiose display. In the winter, it’s a long, frozen tongue, ensnared in ice. Like its namesake, Starlite Motel’s newest recording also skips through an array of modes, and it does so with a fiery, dynamic glee that is hard not to love. Starlite Motel consists of some players you’ve probably seen mentioned on this website before: bassist Ingebrigt Håker Flaten, drummer Gard Nilssen, Kristoffer Berre Alberts on both alto and tenor saxophones, and Jamie Saft on a multitude of instruments: Hammond organ, Whitehall organ, Moog, and lap steel guitar. This fascinating configuration makes for an equally fascinating listen, one that toes the line between improvisational jazz and psychedelic rock with dexterous abandon.

“A Beautiful Nightmare” comes to life with Saft’s horror-movie organ, Alberts’ feverish saxophone wail, Nilssen’s driving rhythms, and Flaten’s murky, percussive bass. Flaten’s turbid guitar-work is even more pronounced in the next piece, “Starlite” - it roils and bubbles, a caustic soup in which the other instruments are submerged. “The Art of Silence” starts with this same abrasive brew, but quickly erupts into a psych-rock workout, with Saft’s glorious organ comprising the beating, bloody heart. A few words about Saft’s organ-work: it’s a pleasure to hear! It lends these tunes a B-movie vibe, sure, a bit cheesy and histrionic - but it’s this same pseudo-spooky ambience that distinguishes the album and sets it apart from other, similar, jazz-rock efforts.

The longest track is “Suspended Veil,” and it’s an opportunity for each member to stretch out their bat-wings: Nilssen moves from pattern to pattern, rhythm to rhythm, with admirable finesse, Saft provides extended chords that evoke abandoned cathedrals with vaulted, cobwebbed ceilings, and Alberts screeches with a burning frenzy. My main complaint about this recording is the way that Flaten’s bass has been mixed - it’s too low! Occasionally, it does rise from the murk, but it would have been nice to hear his throbbing lines with more clarity (though, to be fair, that might have detracted from the swampy atmosphere that the players were working to build). One track in which the low-end gets more prominence is in the final one, “A Thousand Thousandths.” Here, Flaten’s bass is loud, proud, and fuzzed the hell out, and it sounds fantastic! In the same piece, Saft switches to lap steel guitar, a decision that puzzled me at first - I worried that this small change in instrumentation would throw the entire album off-course. Needless to say, my fears were unfounded; Saft’s lap steel does transform the track into a slice of dusty Americana, but it makes for a fitting conclusion. In terms of the B-movie analogy I set up earlier, this is the part where the heroes (bruised and bloodied, but not beaten) drive down the Great American Highway, past cornfields and roadside diners, into the sunset and away from the monsters and ghouls that had beset them at the beginning.

Derek, thanks for the review. I've come to reading this months after listening to the album. I agree with your observation on the bass - it does at first seem low in the mix, but is very fitting to the overall vibe of the album. Alberts' saxes never stray too far off the path and Saft's organ is just a pleasure. Nilssen though, he anchors the album, moving the music from free to rock and everywhere in between. Overall, it's great to hear musicians playing complementary to one another and serving the songs.