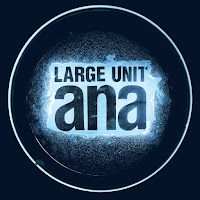 
Ana, Paal Nilssen-Love Large Unit's second full-length album, was recorded just a few hours after the Large Unit's ecstatic performance at the Oslo Jazz Festival on August 2015, while the group still riding high on the adrenalin of the live performance. Ana offers an extended version of the Large Unit, augmented by two Brazilian percussionists, Celio de Carvalho and Paulinho Bicolor, both also played in the live performance and enriched the sonic spectrum of the Large Unit. The three pieces of Ana were tested before many audiences and were recorded before (The EP Rio Fun and the photo book-double Disc 2015, PNL, 2015 and 2016) during the extensive, more than 40 date tours by the Large Unit in Europe and North America, which followed the release of the group debut, Erta Ale (PNL, 2014).


Nilssen-Love explains that he sees in the Brazilian music the same qualities that have characterize his musical activity throughout the years, “a celebration of life – a celebration that should be loud, rhythmic and intense”. That kind of festive sound is now more focused than on previous Large Unit recordings, the studio and the live ones, and in the loose structures of Nilssen-Love's compositions. His compositions for this group are open road maps that suggest shifting dynamics, often attempting to push the Large Unit into different, even contrasting, courses simultaneously. But on the recording of Ana, that took place at the famed Rainbow Studio in Oslo, the interplay succeeds in sounding unified yet keeps its urgent and open looseness. It even offers a clear sense of lightness, despite the massive, 14 musicians instrumentation - two drummers, two percussionists, two bass players (playing on acoustic and electric basses), two tuba players, two sax player, trombonist, trumpet player, guitarist, and electronics player.


The Brazilian talking drums, cuica, and the berimbau blend organically with the polyrhythmic drumming of Nilssen-Love and Andreas Wildhagen on the title-piece, dancing and stressing the infectious horns plus brass riff with joyous rhythmic impact that adapts itself naturally even to Tommi Keränen noisy electronics. The center-piece, the 28-minutes “Riofun”, is already a climax of many Large Unit performances, now rearranged in a new version that incorporates elements of Brazilian Bahia music. Its carnivalistic spirit integrates many approaches of the Large Unit, from the ocean-deep murmuring of the tubas of Per Åke Holmlander and Børre Mølstad, fast soaring trumpet solo of Thomas Johansson and bluesy sax solo of Klaus Holm, explosive outbursts of the whole group and Brazilian, harmolodic-tinged pulses, all accumulate to an ecstatic swinging celebration. The last piece, “Circle in the Round”, matches brilliantly the Brazilian playful rhythms and the inventive interplay and boundless energy of the Large Unit, now with surprising, funny vocal samples, commanding trombone solo of Mats Äleklint, a segment where Julie Kjær's flute playing leads the drummers and percussionists into a dancing march before a peaceful, gentle coda that concludes this great, inspiring celebration.

The Miles Davis band c. 1970 is what immediately came to my mind after hearing the beginning of "Ana". Given that one track is actually called "Circle in the Round", perhaps this connection is too obvious to point out.