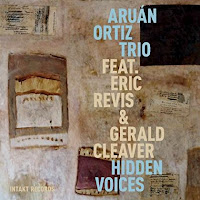 There is something familiar about Aruán Ortiz's approach on the piano. One bit Matthew Shipp, one bit Craig Taborn, and much of his own sound, there is precise angularity and elliptical energy that defines Ortiz's approach to both composition and playing. Perhaps too, his choice of musicians says something - drummer Gerald Cleaver and bassist Eric Revis are no strangers to the type of hyper-melodic logic and muscular pulse found in Ortiz's tunes.

The playing is crisp, fresh, and accessible. There are hints of Latin rhythms mixed with strong modern and free jazz approaches. In addition to several originals, Ortiz also signals his musical lineage in picking Thelonious Monk's 'Skippy' and Ornette Coleman's 'The Sphinx' and gives a nod to his life growing up in Cuba, with a take on the traditional tune 'Uno, Dos y Tres, Que Paso Más Chevere'.

The opening track, 'Fractal Sketches', begins with a sparse and elliptical motif that lurches over a syncopated groove. Then, the classic Ornette tune begins with Revis' solo bass and quickly settles into a lithe and spirited arrangement. The following track, 'Caribbean Vortex/Hidden Voices' has a title with seemingly oblique political overtones, and the music too is full of intrigue and terse rhythmic figures. It builds, layer upon layer, to a tense climax. Ortiz varies the mood but his abstract sense of melody leans towards the spare and clean throughout. The track 'Joyful Noise' is a fun one for fans of prepared piano and 'Skippy' is a smart update on the Monk classic.

Ortiz presents a fresh sound on Hidden Voices and it is a pleasure to hear such a solid and energetic piano trio recording. Give it a click below...