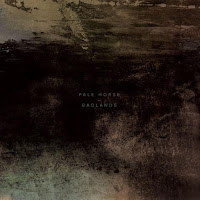 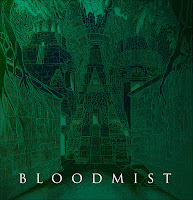 Jeremiah Cymerman’s records need headphones. Or to be played loudly. Each is an exercise in forced immersion, so it’s best to simply yield. Cymerman’s own 5049 Records is back with two new releases: Sheen, the recording debut of Bloodmist, a trio of Cymerman, Toby Driver, and Mario Diaz de Leon, and Badlands, the return of Pale Horse (with Christopher Hoffman and Brian Chase).
Both Sheen and Badlands (Terrance Malick overtones intended?) are rooted in improvisational practice, but draw on many influences beyond the improvised music scene. Both are also born of studio editing and manipulation that might cause some improvisation purists to bristle: post-production tinkering is as much a tool of the craft as improvising. To those types I say: who cares? Just listen. The disorienting, psychedelic soundworlds Cymerman has been delivering for the past several years are unlike anything in creative music—each project has a distinct sound, but all are undoubtedly derived from an overarching artistic vision. In the past, he’s made a compelling case his approach: by using studio tools to highlight different aspects of the performance on 2014’s World of Objects, he attempted to recreate his own subjective memory of performing, effectively allowing the listener to embody his shifting attention as the music develops.

Sheen is assembled from hours of improvised clarinet, electronics, bass, and guitar. It’s a dark ambient record at heart, abstract but suggesting an ominous narrative—it has a cinematic quality that’s easy to imagine driving a moody storyline. This is fitting, as the record culminates in an atmospheric piece that samples a long monologue from the movie Paris, Texas. Eventually, the wild tremolo of a screw-drivered guitar floats in, and the whole thing calls to mind nothing less than early Godspeed You! Black Emperor records. Driver in particular is no stranger to this sort of expansive and unorthodox work, a student of Yusef Lateef and the creative force behind the protean Kayo Dot.

Badlands picks up where the previous Pale Horse release left off. Like Sheen, it’s also steeped in atmosphere and ambience, but allows glimmers of sorrowful melody to occasionally lighten the gloom. “Drifter” begins with a rather virtuosic solo by Cymerman, subtly blurred at the edges by echo and delay, which eventually blossoms into Doppler ranges of cello and horn over Chase’s beating percussion. As the music progresses, it becomes increasingly ritualistic: a music of dark contemplation, as intense and restrained as the desert ascetics.  “Hitchhiker” is another slow, dusky affair, a walk down a nighttime highway, illuminated in brief flashes of heat lightning. This is music as spacious and unforgiving as the McCarthy novels that inspired it.

Two more strong showings from Cymerman, who continues to hone an idiosyncratic and arresting aesthetic in this music.
Paul on Monday, June 06, 2016
Share