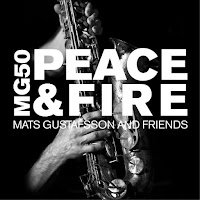 About two years ago the director of the Viennese acclaimed club Porgy & Bess, Christoph Huber, succeeded to convince Swedish sax titan Mats Gustafsson, now resident of the Austrian town Nickelsdorf, to change his plans for his 50th birthday. Gustafsson wanted to spend the day with his wife and three daughters eating his favorite dish - reindeer steak with black trumpet mushrooms, mashed potatoes and lingon berries. Huber had a better offer, a celebration, 3-day festival with friends and comrades from the States and all over Europe that will celebrates what Gustafsson stands for, Peace & Fire.

Peace, for taking Gustafsson multiple and multi-faceted projects and as standing firmly against the greedy, capitalist order of music business that sterilizes creativity and individuality; for suggesting a better alternative - one that shares, open-hearted, communicative and conscious. And Fire, referring to his fiery dedication, playing in an intense and passionate manner, as serious as his life (following his hero Joe McPhee's solo album title, HATology, 1996. McPhee borrowed the title from Valerie Wilmer book from 1977).

Andrew Choate, who wrote the illuminating liner notes, emphasizes that the keyword of this festival was “primal”. The insistent raw and primal force that pervades the music of Gustafsson, but also the sense of ancient, essential, communal activity. Gustafsson, in his notes, insists that it is all about sharing - the music, beliefs, ideas - “open communication and interaction in free collective group settings”, adding in his opening statement of the festival that “this is the music we need in these times and in future times”. But Choate has a point. As he concludes his notes: “Gustafsson’s music embodies that desperate guttural need to speak and communicate when we don’t even know what language is, and he creates a new language for us”.

The festival took place on October 26-28, 2014, and featured solo or duo performances dedicated to Gustafsson in the upper smaller hall of Porgy & Bess and larger outfits on the bigger stage, downstairs. The first three discs in this remarkable box-set document each the performances of every night at the larger space, while the fourth documents the one from the upper hall, all together more than four and half hours of music. This box also offers two booklets with insightful photos of Slovenian photographers Žiga Koritnik and Petra Cvelbar.

Disc 1: The first night began with a hyper rhythmic and muscular short free improvisation of Gustafsson and Austrian drummer Didi Kern, titled “Peace” and “Fire”. Both fed each other with surprising, eccentric ideas, pushing each other to the extremes. The Austrian duo RISC - electric bass and electronics player Billy Roisz and turntables master dieb13, followed with an abstract, almost ethereal drone-based soundscape dedicated to the “Birthday Boy”. Legendary Swedish drummer Sven-Åke Johansson, a seminal influence on young Gustafsson (check the trio Gush with Johansson, Tjo och Tjim, Dragon, 1990), followed with three short solo pieces, dadaistic in spirit, drumming on the first one on phone books with sticks, rubbing on the second soda lids on his drums heads and concluding with a song: “I Didn’t Know What Time it Was”.

Gustafsson closed the night with his Swedish Azz quintet, dedicated to an updated interpretations of Swedish Jazz classics, and featuring tuba player Per-Åke Holmlander, vibes player Kjell Nordeson, dieb13 on turntables and drummer Erik Carlsson. Swedish Azz played with a characteristic reverential disobedience, introducing to the classics pieces of Lars Gullin, Bo Nilsson and Jan Johansson excerpts from Albert Ayler’s first recording, since Swedish drummer Sune Spångberg played on it, and a riff taken from Quincy Jones piece, because he had a Swedish wife.

Disc 2: The trio Fake the Facts - Gustafsson on saxophones and electronics with local Austrians Martin Siewert on guitars and electronics (who also mixed and mastered this box-set) and dieb13 on turntables, augmented by drummers Martin Brandlmayr (of the Radian trio) and British master Paul Lytton opened the night with a stormy, yet methodical sonic searches, patiently gravitating into a cohesive, manic and intense.

The duo of Swedish vocal artist Sofia Jernberg and Austrian electronics player and vocalist Christof Kurzmann followed with a fascinating, extended and quite weird adaptations of Robert Wyatt’s “Alifib” and Joe McPhee’s “Song for Beggars” (the latter was released in a different, short arrangement as a single on Trost Jukebox Series #2, Trost, 2014). The minimal, abstract arrangements of these songs with the fragile delivery of the lyrics by both Jernberg and Kurzmann intensified the arresting spirit of this performance.

Gustafsson returned with an extended version of the Fire! Trio - with bass player Johan Berthling and drummer Andreas Werliin, augmented by vocalists Jernberg and Mariam Wallentin (the vocalists of the Fire! Orchestra), Hungarian bagpipes player Erwan Keravec and Catalan Agustí Fernández on the vintage Crumar organ. This odd outfit began with eccentric sonic searches before settling on slow and heavy riff. Things get much hotter, on the second piece, “Exit Part Two”, now the encore of the Fire! Orchestra performances, and on the final “Would I Whip” (taken from the Fire! fourth album (Without Noticing, Rune Grammofon, 2013), both based on thunderous, repetitive riffs, expanded by the wordless vocalizations of Jernberg and Wallentin, Fernández psychedelic organ flights and Keravec bagpipes sirens.

Disc 3: The new music ensemble Klangforum Wien with Gustafsson opened the third night with compositions by composer Roman Haubenstock-Ramati, featuring Gustafsson on flutephone and the the slide sax, exploring different sonorities of the saxes, and another one by Gustafsson himself. His piece, featuring also contrabass sax player Gerald Preinfalk, dived into deep-toned breaths, howls and blows, building its tension carefully.

The final set was, as expected, by The Thing, one of Gustafsson’s long-standing groups, this time augmented by close friend and collaborator, sax player Ken Vandermark. This quartet stormed with “punk rock free jazz at its finest, a fat sloppy drunk wet kiss that turns into everlasting love and the subtlest emotions you never knew existed at all”, as Choate described it. The Thing concluded with the inevitable, sing-along “Happy Birthday” (captured on a video clip below).

Disc 4: Percussionist Kjell Nordeson, a collaborator of Gustafsson since both were teenagers living in Umeå town in Northern Sweden, opened the festival with a vibes solo, literally sending good vibes for the festival. His second piece, “Summer with M.” was a variation on a piece that he and Gustafsson played 33 years ago, already stamped with a typical rhythmic intensity. Fellow Swedish tuba master Per-Åke Holmlander followed with the humorist and inventive weird sounding breaths and gurgles on “Fifty is just the beginning…”.

Agustí Fernández opened the second night with a brilliant, extended solo piano, “MatsMatMaM / MatsAtsTsT”. He played inside the piano, on his strings, on its wooden body, emitting a clever flow of eccentric hammering, resonating and rubbing sounds that were compared by Chaote to “lovers suctioned lips” and “phantom of a fretless bass”. Erwan Keravec intense bagpipes solo, with its continuous torrents of resonating overtones, filled the small room with guttural, primal and archaic energy.

Kurzmann and Vandermark, half of Made to Break quartet, opened the third night with a beautiful, suggestive soundscape, “Vienna Upstairs”. It is a cinematic piece that balances wisely Kurzmann hyper-realist, alien and urban sounds with Vandermark emotional sax and clarinet playing. Young Swedish sax player Anna Högberg. Member of the Fire! Orchestra, manages to distill Gustafsson's seminal influence on her and her generation in the less than 3-minute happy birthday blessing, “Ha den äran”. A passionate, original and inventive piece, fully committed to keep sharing the fire.

Gustafsson concludes his notes, after thanking all, with some words of wisdom that he has picked along the years. Somehow these words describe himself, his attitude and aesthetics better than any scholastic attempts to do so. Among these wise sayings are the following ones: "A bird can’t fly on one wing"(Joe McPhee); "One vinyl per day keeps the doctor away" (Olof Madsen, sound engineer and producer) and "Fight y(our) stupidity" (Lennart Nilsson, producer of Nya Perspektiv festival in Västerås, Sweden).