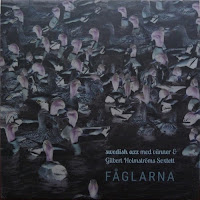 Mats Gustafsson’s and Per-Åke Holmlander’s Swedish azz was founded in order to celebrate the great Swedish jazz era of the 1950s and 60s. It’s a project which covers compositions of this period and integrates them into a contemporary context using live electronics and different structures without neglecting the original. This time they have chosen a piece by Gilbert Holmström, whose music is influenced by classic early American free jazz.

His composition “Fåglarna“ (“The Birds“) is inspired by Alfred Hitchcocks legendary movie from 1963 and especially by Oskar Sala’s disturbing soundscapes. Hitchcock was fascinated by Sala’s invention, the so-called mixtur trautonium (an early synthesizer), and wanted him to create neither a traditional soundtrack nor natural bird sounds - he wanted to have something artificial to increase the horror. Four years later Holmström realized a graphic score for his sextet without any electronics, just for acoustic instruments.

In “Fåglarna“ the piano arpeggios at the beginning symbolize the peaceful atmosphere in Bodega Bay, where the story in Hitchcock’s film takes place. This changes quickly when the reeds come in, their wild and free improvisations represent the sudden attacks of the birds. Especially Holmström’s crystalline saxophone imitates the fierce cries of the animals. At the end of the piece the tension has ebbed away, the arpeggios are back, yet some dissonant elements indicate subliminal danger.

The icing on the cake of the Swedish azz line-up are 79-year-old Holmström himself and 72-year-old trumpet legend Bengt Ernryd. Compared to the original, Swedish azz’s version is much gloomier. Kjell Nordeson’s vibraphone illustrates an insecure atmosphere, then Ernryd’s trumpet in combination with the other reeds increases the tension before the piece turns to a violent free jazz orgy, in which any order seems to have gone overboard. All instruments struggle with each other, there is absolute turmoil. It is interesting that in contrast to other Swedish azz pieces the electronics are hardly audible. All in all, Swedish azz have adopted the structure as well as the focus on the acoustic instrumentation of the original.

Both Swedish azz’s new version and the fact that they have made the original available again make this 12" a real treat.

Fåglarna is available on vinyl, it can be purchased from the label: http://www.nottwo.com/#!mw926/nrszy

You can listen to a different live version of “Fåglarna“ here (with a different Swedish azz line-up):