Mats Gustafsson - This Is From the Mouth & Det Flygande Barnet 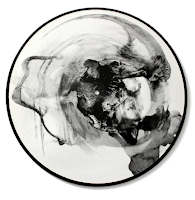 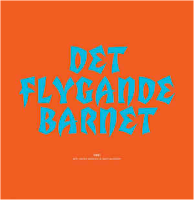 Mats Gustafsson’s single-sided LP This Is From the Mouth and Fire!’s Det Flygande Barnet were recorded around the production of Roland Schimmelpfennig’s play “Das fliegende Kind“ (“The Flying Child“) at the Orion Theatre in Stockholm. Schimmelpfennig’s play circles around a crucial, horrible moment: A father runs over his own child. The play shows only two people, the father and the mother, in different stages of their lives - at the age of 40, 50 and 60. At the age of 40 is the time before the accident, at 50 and 60 the parents have learned to live with the burning horror of the loss of their child, which has grown more and more. The play vivisects this kind of pain relentlessly.

Det Flygande Barnet is music written for the play itself and presents two three-minute songs, “En Man Kring 40 - 60“ (“A Man Around“) featuring David Sandström, and “En Kvinna Kring 40 -60“ (“A Woman Around“) featuring Mariam Wallentin. The play consists of a lot of repetition and the two pieces use this stylistic device as well, which makes the cruelty almost intolerable. “En Man Kring 40 - 60“ centers around a monotonous doom metal riff and highlights Mats Gustafsson on electronics. David Sandström, drummer and vocalist of the hardcore punk band The Refused, cries out and therefore embodies the ultimate terror the father must feel. The flipside, “En Kvinna Kring 40 - 60“ comes up with a dragging, repetitive bass/drum motif over which Gustafsson’s saxophone wails, while in the background Wallentin’s human voice stammers percussive fragments.

Both pieces are typical Fire! stuff from the twilight zone of metal, jazz and even new classical  music, which is why this 7’inch is a must for fans.

In contrast to Det Flygande Barnet, This Is From the Mouth was not written for the play itself, it was conceived and recorded separately, although it breathes the same spirit. Gustafsson, who is on baritone saxophone, organ and electronics here, has again teamed up with David Sandström and Fire!’s Andreas Werliin, who are both on drums here. Driven by the two percussionists the piece stands in the tradition of other Gustafsson collaborations like One Bird Two Bird (with Masami Akita and Jim O’Rourke) or Live at The South Bank (with Kieren Hebden and Steve Reid). “This Is From the Mouth“ (the piece itself) is a huge drone, a monstrous wall of sound, a distorted, dark, slow-moving beast. Like the horror of the two protagonists in the play the tension of the track is almost unbearable. One of the drummers starts with a dull motif on the snare and Gustafsson contributes a monotonous organ chord. Layer after layer of noise is added, there are single saxophone chords which vanish in nothingness, electronic drizzle is thrown into the maelstrom. As “This is From the Mouth“ progresses, it increases in dynamics, volume and intensity until it finally fades out.

This Is From the Mouth is available as a single-sided vinyl picture disc in a limited edition of 300 or as a download.

You can listen here:


Det Flygande Barnet is available as a 7’ inch single in an edition of 700. Only 100 were reserved for normal distribution, 600 are sold at Fire! concerts.

You can buy it from www.runegrammofon.com.
Paul on Wednesday, June 22, 2016
Share