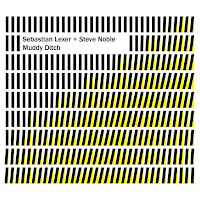 There’s an insatiable curiosity burrowing in the mind while listening to the freely improvised, deviously abstract outing of German pianist Sebastian Lexer and English drummer Steve Noble, Muddy Ditch. Robbed of the tangible, explanatory presence of a live performance, with all the small gestures and physical synergy lost to the medium, one needs to entertain what-ifs and conceive new contexts and narratives around this sparsely layered, idiosyncratic playing and interactions. In return, their music will bring enlightenment by means of sensory deprivation and by asking the listener to become an active participant in the unfolding soundscape.

Muddy Ditch documents two concerts that Lexer and Noble performed at London’s Cafe OTO in 2011 and 2014. From end to end of the two tracks, “Pool” and “Loess,” the duo’s basic language remains unchanged. Resorting to a dialect nourished by sequential superimposition and counteraction of alien, nigh impossible noises, they spawn incongruous yet mesmerizing musical patterns. To achieve this, Lexer closely amplifies his piano and feeds it through live processing and effects, creating feedbacks and mutating sounds beyond what should be acoustically possible. Contrary to appearances, it’s a reductionary process with the help of which Lexer tries to understand the instrument’s pieces while he subverts them, dissolves them into mere tones, and then builds new structures, augmented with electronic processing and abrasive resonances.

At other times and especially during the second tune “Loess,” he dives into rumbling, heady sections, as if punctuating thoughts and introducing creative conflict. But the rumbles are as abstract and diffuse as the improvisational conversations with Noble, quickly retreating and receding, avoiding any semblance of conventionality. Noble responds with measure, bouncing ideas and teasing his partner through dialogues. He approaches the drumset and various percussion instruments as a child might approach a glass bottle. As he explores, in amazement, the sounds that he’s able to produce, he tintinnabulates and crashes on the cymbals and rolls his sticks against the drum heads, mouthing tumultuous roars.

There’s not much difference in mastery between the two pieces presented here, with “Pool” being the more relaxed cut, anchored to lulling segments, while “Loess” is, conversely, nervous and spirited, with reduced space for the digitally enhanced phrases and with a preference towards analog verses. Throughout, both players seem concerned and intrigued by quaint textures and shapes of individual sounds, rather than burdened by trying to fit them into compositions. Thus Noble’s rubbing, sawing, and grating will come into contrast and clash stochastically with Lexer’s prolonged piano tones, drones, and ominously deep key blows to generate a sort of a faux electronic, deranged ambient scenery. On the rare occasions when the duo does subside into unpredictable call-and-response patterns—a snare scratch might or might not be answered with a hard stomp on the piano keys—it’s only to feel each other’s pulses, preparing for the next lunge into the esoteric and abstruse.

There’s communication and there are lone amplitudes, textures expanding and contracting, but there’s always and foremost flow—from piercing fortes to soft, gentle individual noises and silences—that makes Muddy Ditch a dynamic, engaging listen that doesn’t seem to stop to contemplate for too long even when diminished to whispers. No climaxes. No themes or motifs. Only raw artistry.