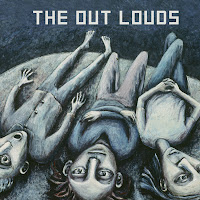 The Out Louds are the trio of Mary Halvorson (guitar), Tomas Fujiwara (drums), and Ben Goldberg (Clarinet), this eponymous release being their first album as a group, though Halvorson and Fujiwara played together as part of a trio in Thumbscrew.  The trio here represents some of the brightest and most versatile talents in jazz today.  Halvorson has an impressively idiosyncratic voice on the guitar, playing on recordings that range from straightforward jazz, to rock, to more harsh post-music, and abstract ideas of freer improvisation.  Fujiwara has led a multitude of bands and kept rhythm for an incredibly diverse and wide ranging set of composers and other band leaders.  Ben Goldberg was one of the first jazz musicians experimenting with forms of traditional/ethnic Jewish music, and his playing usually blends between the lyrical, the rhythmic, and the exploratory.

On the album at hand, these players are settled into a much nuanced style.  They are not loud, more out, though with a touch of cohesion.  This is to be expected, as all players fit into a post-jazz paradigm in some way.  Fujiwara is very expressive on his kit, coaxing a full range of sounds and textures, as well as oblong rhythms that range from propulsive to disjointed, micro-studies of time and space.  Goldberg is at once lyrical, melodic, and abstract.  His playing invokes virtuosity, tightly wound runs interspersed with abstract pointillism, merging into simple melodies that seem almost serenely pastoral in their tone and pace.  Halvorson’s timing, phrasing, and choice of notes are impeccable as usual.

So the Out Louds tend to all play reactively, with few examples of one member taking the recording by the scruff of the neck and leading it somewhere.  If anything, Goldberg and Halvorson play off Fujiwara’s almost orchestral sounding kit, pushing forward when he creates rhythm, but exploring space when he becomes more abstract.  It’s definitely not something if you want highly energetic or cacophonous jazz, but it is an album of calculated risks, ideas rooted firmly in the language of improv, but speaking in their own voices.  In this sense, it is surely an unqualified success.  These artists definitely have the same vision here, but their unique ideas and their ability to hone in on what each other are trying to express results in some incredibly fine collective improvisation.

So, no this is not the most visceral album you will hear this year; not close.  It has a certain languid and reactive quality as I described above that doesn’t necessarily try to pull you in, but rests assured in what it is and offers the listener the opportunity to take it or leave it, seeming fully secure and happy with what it is with no pretense.  On the other hand, if you do let yourself sink into this aural world you will find a clear and beautiful kind of careful sonic research, with complex and thoughtful interplay between the musicians.  The track names are apparently all species of flowers found at the Brooklyn Botanical Gardens, and the playing, specifically Goldberg’s, evoke the sense of plants growing upward toward the sun, of knotted and twisted roots underneath.  False Goat’s Beard reminded me of Eric Dolphy, possibly because it is slightly similar in name to Hat and Beard, possibly because the album in general is all relative to Dolphy’s style of free jazz.  However, it did so more in the sense of Otomo Yoshiide’s cover of the classic Out To Lunch, with interjections of modern sound collage, seemingly incongruous electronic sounds blending in and fading away.  While Yoshiide purely covered and injected his own identity into these Dolphy classics, The Out Louds present something similar, though different, perhaps not as experimental, but more personal.  They take old forms, add their own voice, and in doing so create new narratives, forms of expression, and I think, most impressively, create an incredible atmosphere of collective improvisation that really does not revolve around or place more import on one player, but hits that rare place of true conversational improvisation in a way in which most artists could only imagine.


Available through Instant Jazz and the Downtown Music Gallery