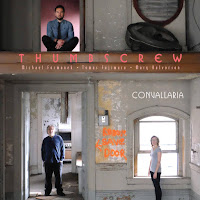 While fans of Thumbscrew have had plenty of opportunity to hear Mary Halvorson, Michael Formanek, and Tomas Fujiwara play together since the group’s 2014 debut, there seems to be something special about the music that arises from this particular trio setting. Perhaps the fruits of those other excursions—Fujiwara’s The Hook Up, Formanek’s Ensemble Kolossus—are distilled in this intimate context, where each musician has the space to contribute equally and which affords them the flexibility to play with the boundaries between jazz and rock, melody and noise, structure and openness. Likewise on Convallaria, developed during a two-week BNY Mellon Jazz Residency at Pittsburgh’s City of Asylum, Thumbscrew manages not only to bring us what we expect from them but also to push forward into new territory.

Halvorson notes that the album’s namesake flower is both “sweetly scented and highly poisonous… a good description of Thumbscrew.” Indeed on “Cleome,” which opens Convallaria, a gentle stop-start introduction wholly belies the distorted mayhem you’ll hear if you skip to the middle of the track—though of course the magic is in the architecture of that bait-and-switch deception, not in the extremes themselves. “The Cardinal and the Weathervane” works this way too, pivoting suddenly at the two-minute mark from a mellow, wistful melody to a bombastic heavy metal riff. The title track manages to blend light and dark at the same time with its arpeggiated theme: simple, steady, and almost familiar but not quite, tinged as it is with sour harmonies and stuttering rhythms.

Other tunes keep to one side or the other of the divide. On the “sweetly scented” side, the short “Sampsonian Rhythms” begins with an infectious groove from Fujiwara and goes on to feature some nice counterpointed interplay between Formanek and Halvorson. On “Danse Insensé” Fujiwara is especially playful, offering a cheeky solo built almost entirely on blocks, bells, and muted skins. The closing “Inevitable,” while not completely innocent of Halvorson’s patented pedal effects, is a disarmingly earnest and beautiful ballad in which the trio revert to their conventional roles to good effect.

As for pure “poison”… a pair of tracks from the middle of the album stand out. “Trigger” is a haunting piece. After a long bass introduction, malleted drums and crumbling guitar augment the eerie atmosphere. Unlike most Thumbscrew compositions, a stable rhythm never quite comes together, leaving the elements in suspension. Then comes “Screaming Piha,” named after a South American bird. Droning and noisy, this one’s a favorite of mine in part because of the way it suggests the discovery of a new species in Halvorson’s and Thumbscrew’s ecosystem of sound. Convallaria is more than enough to tide us over while we wait to see where the group will go next.

Available at the Downtown Music Gallery

Saw the group on the first date of a small tour in support of this release; those settings are interesting to see where they've subsequently taken the individual songs although Fujiwara pointed out that they did some things in the studio which they can't in a club. This review captures the essence of the music imo.