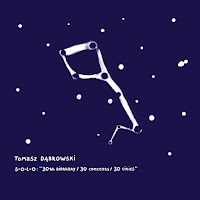 Polish, Denmark-based trumpeter Tomasz Dąbrowski found an original way to deal with the existential crisis of his 30th birthday. He chose not to spend time thinking on the time passing so quickly but rather to try new things, “looking for another unopened door”. So, his seventh album as a leader is also his first solo recording, made up of 10 songs intended to represent 10 chapters of one story. Only him playing, only the trumpet and the mutes, with no electronics or amps.

These pieces were shaped during a series of 30 solo concerts celebrating his birthday in 30 different cities, 12 countries and along a tour that took 6 months and 29 days, beginning in Tokyo, Japan and ending in Poznań, Poland. The ten, unnamed pieces, were recorded on June 2015 in Mariendal church in the Frederiksberg district of Copenhagen.

All of these pieces highlight the rich and newly enriched language of Dąbrowski, already one of the most prolific European trumpeter. These piece feature not only his commanding technique or his nuanced sonic spectrum but also his well-crafted architecture of sounds and textures, a sharp sense of space and time and above all, a gift to form an immediate emotional impact and an arresting narratives that radiate a rare poetic beauty. Even on the most experimental pieces, as on “Part III”, where he begins to play a series of almost silent overtones; the talkative “Part V”; “Part VII” where he forms a series of percussive patterns with light touches on the trumpet valves or “Part X” where his whispers into the trumpet mouthpiece suggest a distant electric storm, he transforms these skeletal, fractures sounds into complex and detailed stories.

Eventually, playing solo is an experience that teaches the musician and the audiences important lessons not only about music, but the experience of listening or art at large. Dąbrowski found out that he discovered not only new sounds, techniques, and textures but how this life-changing journey caused him to feel humble and appreciative to all who are willing to take the risk, and listen with wide open ears and hearts to this one of a kind experience. A formative lesson to all anyone who is involved in this art of free, creative music. Dąbrowski, no doubt, is an excellent student.