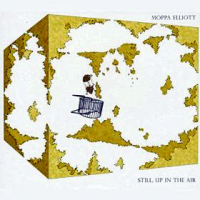 Recently I talked to German guitarist Nicola Hein about the difficulty of finding your own voice on a string instrument. He thinks that it’s easier for the reeds because they can use a lot of split notes or overblowing, they can even take their instrument apart and play it without the mouthpiece (or only the mouthpiece) while the strings have to use additional material like pieces of metal, license plates, mallets, drums sticks etc. to find new, unusual ways of expression. Barry Guy is the master of this technique.

Moppa Elliott, the bassist and mastermind of Mostly Other People Do The Killing, has chosen a different, rather puristic method on his first solo album Still, Up In The Air. There is no additional material, it’s just the player and his bass. And while this approach can be tedious and lengthy (I remember a solo performance by Paul Rogers - a player I usually really like - who simply overdid it then), Elliott can captivate his audience with his way of playing.

The reason for it is the fact that Still, Up In The Air is an album of sharp contrasts. Elliott uses a fixed set of elements that structure his compositions. He juxtaposes high speed tremolos with joyous folk motifs or counterpoint melodies with harsh single note arcos, it’s like a huge musical collage. “Sequence Nine“ is a perfect example of the different atmospheres he creates, it constantly moves between relaxed and nervous, reluctant and aggressive. Light hearted passages are replaced by dark, spooky sounds, which remind of Mohammad, the Greek princes of darkness. Yet, Elliott does not choose these elements randomly. They serve as a basis for his compositions to which he adds new elements when he considers it appropriate. “Sequence Three“, the opening track, starts with a plucked figure foiled by hard slabs, then there is a blues riff which runs out of line - just to morph into a break with a repeated single note (another basic element). “Sequence Eleven“ even displays a short Latin phrase. Some themes come up again and again (e.g. “Sequence Ten“ presents a similar beginning as “Sequence Three“) and are displayed in a different context. Indeed, this reminds of MOPDTK but in contrast to them there is nothing tongue-in-cheek on this album. Elliott likes to incorporate these fragmented melodies along with freer parts, often it sounds as if there were two bassists at work, the excellent musicianship is another quality of the album. His articulation is crispy and fresh, as well as the production.

Still, Up In The Air was recorded on February 16, 2015 at St. Stephen’s Pro Cathedral in Wilkes-Barre, PA.

You can listen to “Sequence Three“ here: