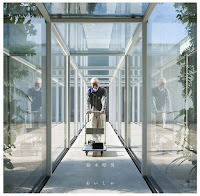 Designing sound for installations and performance art is particularly difficult, needing to be effective in the moment and continually engaging for the audience, taking in consideration physical space while retaining musical coherence. Documenting such projects on disc is even more difficult, with the risk of having a musical performance that inevitably lacks the crucial aspect of the environment for which it was created.

With a career spanning more than 50 years, Akio Suzuki has constantly succeeded in both these endeavors, producing acclaimed sound installations and site-specific performances that always retain a strong musical identity when translated on record. His latest release a i sha is no exception. Created for the 21st Century Museum of Contemporary Art in Kanazawa in 2009, the performances were constructed around self-built sound producing devices.
Howling Objects used cylindrical paper boxes containing radios and microphones, that responding to the physical spaces in which they were located produced variable undulating drones, sometimes reminding of more familiar sounds, like guitar feedback and traditional electroacoustic treatments. The second performance employed a small dolly where the same radios where put and carried through halls and corridors, responding to the space of the gallery and creating an ever-changing musical landscape that merged with the environment itself and the audience inhabiting such space, adding another layer of complexity.

From a strictly musical perspective the album is an interesting mix of environmental sounds, electronic drones, and accidental rhythms, and Suzuki’s role is particularly intriguing: more than performing a musical piece, he prepares the conditions for it to occur, letting it to be shaped by randomness through spontaneous interactions with the surrounding ambience. The mind of the composer is always present though, emerging through carefully built sections that provide structural coherence – listening and reacting to the accidental interactions between sound and space in always meaningful ways. In the end, the musical experience unfolds in a natural, relaxed way, as inevitable as the sonic landscape we all live in.
Paul on Thursday, July 14, 2016
Share