The Sound of the North: Norway and the European Jazz Scene - Luca Vitali (Auditorium International, paperback, 2016) ****½ 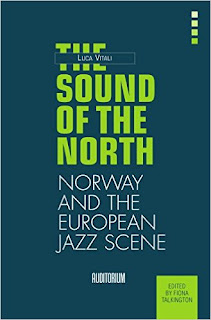 Italian journalist Luca vitali is the first writer who managed to explain what seemed to be the sudden popularity of Norwegian jazz, in its many formations and manifestations, since the mid-nineties and until today. Many articles in music magazines, websites and blogs or academic dissertations, attempted before to explore different aspects of this cultural phenomenon, but none of the writers succeeded to describe it from so many angles as Vitali did.

Vitali, who published the book originally in Italian, has an encyclopedic knowledge of the history of Norwegian, and in many instances even an intimate and personal familiarity with many of the heroes of that scene. But not only the musical sphere. He tells in a concise and informative language how Norway cultivated a healthy, ever growing cultural environment - encouraging music education from early age, investing in excellent music academies, establishing many renowned jazz festivals, and supporting economic initiatives that fertilize mixing of genres and styles. He, obviously, knows all the local clubs, active and defunct, sound engineers, journalists, festival managers and many more. Vitali knows the history of Norway, have insightful remarks abbot its still egalitarian social and economic structure and identifies with the great love of the Norwegians with the local nature scenery.

Vitali begins the story of the Norwegian jazz more than fifty years back, with George Russell, the innovative pianist, composer and bandleader who lived in Sweden in the sixties, but often visited Norway and took young sax player Jan Garbarek to his group. This is the turning point that symbolizes the transformation of the local jazz scene from a huge American influence to the rise of local heroes with a unique sound, often described as Nordic, tough Vitali clearly does not subscribe to such superficial sonic descriptions.

Vitali tells the important role model that Garbarek set, still one of the most revered musicians in Norway, from a modern jazz sax player to a musician who sculpted his highly personal voice, tinged with local folk influences. He expands on the importance of the first generation of Norwegian musicians to be signed by the German ECM label- bass player Arild Andersen, guitarist Terje Rypdal and drummer Jon Christensen, all are still active, creative forces in the local scene.

But Vitali knows sketches also the counter movement to this generation, spearheaded by Nu-jazz pianist Bugge Wesseltoft, and later by cross-genres bands as Jaga Jazzist, experimental labels as Rune Grammofon and free jazz pioneers as reeds player Frode Gjerstad and his close collaborator Paal Nilssen-Love. Despite what me seemed as opposed musical camps there are strong links and many collaborations between musicians from both camps, as well from other genres - noise, contemporary music, metal and naturally, folk music.

More on the book: http://www.thesoundofthenorth.net/ 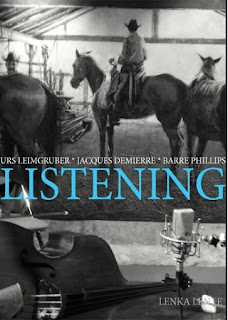 In 2015 the free-improvising trio of Swiss sax player Urs Leimgruber, French pianist Jacques Demierre and American, based in France double bass master Barre Phillips planned to celebrate its 15th anniversary, as well as the 80th birthday of Phillips, with tours on both sides of the Atlantic. This trio released so far five albums, the first Wing Vane (Victo, 2001) and the last one, 1↦3⊨2:⇔1 (Jazzwerkstatt, 2015), establishing a unique, experimental language, as Demierre describes it: “The silence between each performance is simply a period slightly longer than the silences played on stage. The listening process of the trio does not stop when the performance is finished, but continues, it constantly weaves dynamic links with our memory until the next meeting of us”.

Listening is a tri-lingual travelogue, beginning in March 2015 and ends on December of the same year, bringing the parallel narratives of the three musicians - Leimgruber in German, Demierre in French, adding many insightful photos, and Phillips in English. The book documents their personal experiences, focusing on “creating new spaces with sound”, as Phillips defined it, the hardships of any tour of such an outfit, travelling “thirty hours door to door. For just a hour concert?”, playing on a piano that is more a “sound sculpture” than a piano, but eventually meeting many curious audiences that are eager to understand “how it works”.

Unfortunately the touring plans were marred by Philips health problems, his continuous struggle with what he names the “Black bat”. Leimgruber and Demierre continued the American leg of the tour as a duo, but began the American performances with video montage of interview with Phillips and live footage of the trio. Phillips joins Leimgruber and Demierre again to few European performance, enjoying the “new-ness” of being back together: “the music took off, outward bound, to other universes and dimensions”, before being hospitalized again. Still, Phillips concludes this book with a great belief in the the trio legacy: “giving it a deeper meaning than ever before and creating a future that will carry on until the last drop, the last sigh, the last stroke”. 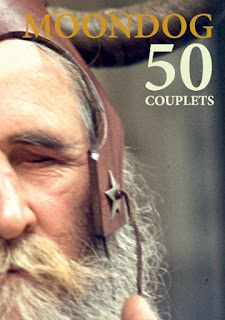 This pocket-size, bilingual (English and French), 40-pages book is published on the 100th birthday year of Moondog (aka Louis Thomas Hardin), the unique blind composer, poet, homeless musician dressed as a Viking and inventor of instruments, hailed by innovative musicians as Charlie Parker and Philip Glass. This book collects the poetic couplets of Moondog, suggesting his words of wisdom, delivered in two line rhymes, often spiced with an absurdist sense of humor.


An armored knight fell of a ship and sank into the blue. / He looked a lobster in the eye and said “you’re armored,to?”