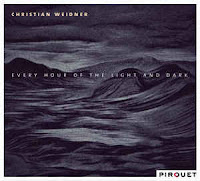 When it comes to so-called “free” jazz, there’s a lingering misconception among some listeners who’ve only heard Sun Ra, Albert Ayler, or late-period Coltrane - there’s the belief that “free” means “fiery,” and that all of the music, by necessity, comes out of the same white-hot barrel as Peter Brötzmann’s Machine Gun. Of course, that’s not true; while some of the genre’s best recordings are, indeed, explosive, there are just as many that evade that descriptor. In short, there are many shades of freedom. Some sound like spiraling shrapnel from a hand-grenade, and others are closer to the lazy flights of migratory birds.

Christian Weidner is one of those artists who sticks to the cooler, calmer side of the free jazz spectrum. His compositions are, well, composed, and they always seem to maintain a certain reserve, an equable demeanor that lends itself well to the late hours. On this, his latest album, Weidner returns with the trusty group that helped him deliver the enchanting Dream Boogie: Achim Kaufmann on piano, Henning Sieverts on bass, and Samuel Rohrer on drums. Dream Boogie was a stellar effort, with pieces that ranged from the architectural elegance of ECM, to pieces that wandered down more unpredictable paths.

After one or two listens, there might not seem to be much to distinguish Every Hour of the Light and Dark from the previous album; both exist in a world of dreams, and the compositions themselves mirror this fact - sometimes, they glide along with a sensible, transparent beauty. Other times, they come to us in fractals, shards of melody that skip and stutter and swirl. Like the duo of Ivo Perelman and Matthew Shipp, Kaufmann and Weidner have a certain simpatico when they play together, and they tackle all this stylistic variation with astounding proficiency.

Though this newest album shares many attributes with the 2012 outing, I would say that it’s a refinement of what made the last one so compelling. It’s even more ethereal, and it strikes me as (yet again) an album that is practically made for nocturnal musings. “Tethys” is lovely, yet slippery, with Kaufmann’s notes sometimes clustering, sometimes cascading, but never spoiling the listener with a straightforward progression. In many ways, the crystalline delicacy of his playing on this piece recalls Debussy’s compositions - impressionistic tonal swaths that are near-spectral in their lightness. The title track develops in more direct ways, but still maintains a heart of inscrutability; Weidner is endlessly expressive here, but he is also laconic - each note arises as if it were the last drop of water squeezed from a damp towel. This terse approach is shared by the rhythm section: Henning Sieverts plays with great economy, not often taking solos or busying up the compositions with undue complexities. Likewise, Samuel Rohrer has a soft touch - he plays just what is necessary to maintain the foundation of Weidner’s shadowy sound-world.

As its title implies, “Weightless” is a sparse affair, and its success owes perhaps more to the vacuum between the notes than to the notes themselves. Although it stretches to seven minutes, it never loses its enchanting quality - like being stranded in the depths of space, watching the Earth move from marble-to-pea-to-speck, it’s enchantment of a somber sort, but enchantment nonetheless. “Dance Fantasm” is a quick antidote to the solemnity, injecting the album with a burst of primal energy. It’s only a burst, however, being soon replaced by the elegiac wails of Weidner’s alto on “In Memoriam.” In this piece, the other players are slow to appear, giving Weidner and Kaufmann an opportunity to show just how deep-seated that aforementioned simpatico truly is. When Sieverts and Rohrer do arrive, it’s not to tie a rhythm to Weidner and Kaufmann’s productions, but to accent them with sibilant splashes (in Rohrer’s case) and leaden lumps (in Sieverts’). The final piece, “As Long as Now,” finds the album closing in much the same way that it began - somberly.

Weidner’s compositions are pleasant, and they never veer off into the harsh, uncompromising landscapes that many other albums lumped under the “free jazz” label tend to do. For that reason, Every Hour of the Light and Dark might strike some listeners as overly safe. While my first couple of listens seemed to be leading me to that same opinion, it was with a few more that I started to see the complexities buried in these compositions - yes, they are (for the most part) calm, but there is a knotty, mystifying heart in the center of this album. As with any exceptional recording, it is in the untying of those tangled threads that we receive the greatest sense of fulfillment.