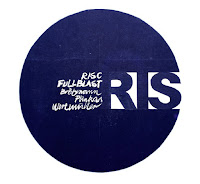 Full Blast is one of the most exceptional outfits of German reeds titan Peter Brötzmann. This is an equal trio that features classically-trained, Swiss electric bass player Marino Pliakas and drummer Michael Wertmüller. Both play leading roles and rarely are confined to the role of a rhythm section. Most of the Full Blast pieces are composed (the trio last album, Sketches and Ballads, Trost, 2011, was based on Wertmüller 50-pages, notated composition), or at least structured along a distinct narrative, and its sonic aesthetics is more open to sonic experiments. Still, Full Blast genre-bending blend of fiery, muscular free jazz, metal and noise suggests that it has its roots in another legendary group of Brötzmann, Last Exit.

Risc, Full Blast fifth release in the last decade, celebrates the work of German sound artists Gerd Rische, the former head of the Berlin Academy of Electro-acoustic Music, who sadly departed on October last year, shortly after the production of Risc was completed. Rische collaborated before with Pliakas and Wertmüller on a project based on the compositions of Charles Ives. While both were artists-in-residence in Berlin,  Rische added electronic treatments to the Full Blast pieces while they were recorded live, and added some more treatments, this time with Wertmüller, after the recording was mixed and mastered.

The electronic treatments and enhancement sound at first as adding elements of surprise and danger and as distancing the urgent playing of Brötzmann from its angry, emotional core with premeditated, cold and subversive sounds. But actually the dimension of arbitrariness and the repeated, abrupt alien sounding interventions charge Full Blast tight, volcanic interplay with additional layers of power and conviction, often channeled to an inevitable cathartic climaxes. The 12-minutes “Doss House” demonstrates best this kind of live and later enhanced interplay. The piece begins with Brötzmann warm yet tense playing, soon contrasted with an industrial, massive grind created by Pliakas and Wertmüller and enhanced by Rische electronic sounds. Still, Brötzmann struggles with this kind of grind, alters its mechanical tone into a more humane pulse, now sounding as a twisted, speed metal distorted beat, but one that also pushes Brötzmann to more extreme, possessed mode of playing.

“TTD” begins with a radio recording of Timothy Leary, calling the sixties, counterculture-era slogan - Turn On, Tune In, Drop Out - but this piece offers a sober, even ironic perspective on Leary innocent vision. Full Blast mix of heated interplay, accompanied by an uncompromising march-like beat with disturbing and brutal electronic sounds create a nightmarish soundtrack to that era that ends with a fitting, magnificent, multi-dimensional blast. The last piece “Roguery” succeeds to suggest a balance between Brötzmann powerful mode of playing and the massive, heavily treated pulse, in a manner that Full Blast, all and the three musicians individually, together with Rische, keep feeding this immediate interplay.