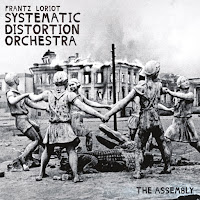 At the risk of beginning with a cliché, there’s an organic quality to the music on the debut album by violist Frantz Loriot’s Systematic Distortion Orchestra. Developing with tectonic stateliness and glacial patience, the four compositions that make up The Assembly evoke natural phenomena—storms and swarms, cycles of life and breath. The playing has a physicality that suggests effort and sweat. The beauty of this music is not only in its sheer intensity but also in the details of its incremental escalation. So get out your headphones and close your eyes.

The Systematic Distortion Orchestra is a twelve-piece group with a line-up not terribly far removed from Carlo Costa’s Acustica. But by doubling and tripling some of the instrumentation, Loriot tailors his ensemble to the specific needs of these compositions, especially their timbral richness and complex layering. The Systematic Distortion Orchestra is: Loriot on viola; Nathaniel Morgan on alto sax; Brad Henkel and Joe Moffett on trumpets; Ben Gerstein on trombone; Sam Kulik on bass trombone; Sean Ali and Pascal Niggenkemper on double basses; and Carlo Costa, Devin Gray, and Flin Van Hemmen on drums and percussion.

Establishing a reliable structural principle, the album’s first track, “Echo,” begins quietly, with spare, disparate sounds not yet assembled: clattering percussion and sputtering brass, bowed bass warming up. A slow melodic phrase weaves in and out of the gradually accumulating morass of noise. I can’t help envisioning a seascape in tumult—drums sloshing and crashing over the terrible dark depths of arco string textures. The turbulence heightens and heightens until the only way to add to it, around the sixth minute, is for someone to scream. Not long after this climax, things begin to calm down and thin out. The deceleration is as masterful as the acceleration that made it necessary. And it would be irresponsible of Loriot not to take us back down to the ground carefully and safely.

Even if for my money “Echo” packs into ten minutes what other albums struggle to achieve in an hour, it’s worth moving on to the three remaining pieces. My only misgiving about the follow up title track is that it seems to try to replicate the experience of the opener. But even if the grammar is the same, the language is new. The single epic breath of “The Assembly” is achieved not by the weighty sounds of “Echo” but by a fresh lightness. Pizzi bass replaces arco, kisses and whispers on the horns replace expansive grave melodies.

Next, opening with a long poem by bassist Ali, “…Maybe…Still…” changes direction more drastically. Little by little small sounds begin to infiltrate the space between Ali’s measured words; when the poem is over, the sounds continue, not mounting as in the previous pieces but creating an eerie, static atmosphere full of phantom groans and whines—this time I can’t help picturing an abandoned theme park, the amusements left creaking in the wind.

The final and longest track is called “Le Relais,” and the group delivers on the promise of that title—a thirteen-minute musical relay that puts Loriot’s novel line-up to new use. Still, within this system, the familiar pattern of rise and fall plays out—first in the percussion, then in the strings, and finally in the horns. Each overlapping leg of the relay is a master class in technique, control, and listening. As a whole, the piece forms an incredible triptych.

The Assembly comes highly recommended and is available from the OutNow Bandcamp page.