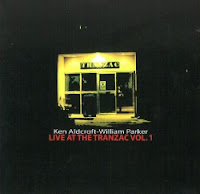 Thirteen years ago I set out to my local Arts Cinema to catch a screening of the film Russian Ark. The film was set in the Winter Palace in St. Petersburg and my interest in seeing this was that I had heard the film was shot in one continuous take. At the time I thought that this seemed quite extraordinary and I was keen to experience this particular movie and curious to see what the overall effect would be. When the film started I watched goggle-eyed for the full one and-a-half hours trying not to blink so I could experience this cinematic triumph in all its fluidity. When I left the cinema later that afternoon I soon realised how tired I was and how drained I felt. Having to concentrate without any edits or cuts between scenes had left me thoroughly exhausted, and it was interesting to note how much I took these short pauses or jumps between sequences for granted to help me focus and to give brief rests in concentration, which I clearly needed.

Live at the Tranzac Vol. 1 is a single 45 minute continuous piece of music, and although to have a continuous piece of music for this sort of length is nothing new, all the world over, when compared to the unbroken flow of images of Russian Ark, it is still fair to say that the music asks more of one’s ability to concentrate over a greater period of time than a set of shorter tracks with a generous pause between each musical event.

After a brief period of gradually feeling their way into the music, the two contrapuntal lines of guitar and acoustic bass weave a dense melodic web of linear sound, with Aldcroft’s guitar sitting prominently in the balance. The free array of notes that he spatters around using a strong picking technique that gives it that initial percussive edge, whilst Parker’s industrious bass acts as a sort of reflection of the movement of the guitar line. As in any good contrapuntal music each line is complete in it’s self and can be clearly heard as it’s own figure, as well as working together to create the overall texture. This improvised material powers on at a relentless pace, with a few gradual peaks and troughs, for about 25 minutes, when it then falls away into a sparser set of sounds. Some rumbling in the bass, strongly picked harmonics and short repetitive sequences deftly engineered with the help of some subtle looping, the music enters a pulse-less phase whilst gradually building and developing with the same industry and intent of the first half. Out of a percussive moment, Parker’s arco bass, rich in overtones, defines a new direction. Sliding sustained tones weave in and out of each other, sounding like a Penderecki piece being played on a radio in the background which gradually comes to the fore. Credited as a shakuhachi, but sounding far too reedy, and much more like the shawm that Parker sports, the wind instrument sings above the choir of electronic glitchy tones whilst Aldcroft plays an African-like rhythm on his guitar which then ties the music over before Parker switches to the Malinese kora, providing a clever ending that acts as the cherry on the top.

Initially recorded in 2013 this continuous piece of improvisation serves as a reminder of the unfolding nature of improvised music and the beauty that this musical form encapsulates. With so many studio recorded albums being made up of short edits from longer ‘jams’ and the quick, incessant and kaleidoscopic nature of mainstream media delivering bite-size chunks of data for us to ingest (not necessarily digest) thank goodness for this art-form that we can all escape into for a sustained period of time.
Paul on Monday, August 01, 2016
Share