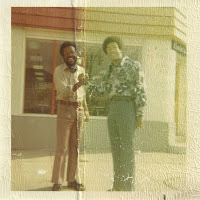 What can’t Jeff Parker do? From free improvisation to jazz to post-rock, the Chicagoan guitarist (now based in LA) thrives in any number of habitats, though he tends to get more exposure as sideman than bandleader. Working brilliantly in the former capacity on Makaya McCraven’s In the Moment (2015), Parker connected with the folks at International Anthem, who released his latest album as leader this June. The New Breed looks both backwards and forwards. Featuring a yellowed old photo of Parker’s late father on its cover, the album is named after a clothing store he owned in the 1970s. But the title is also a projection, a promise even, for the future—Parker’s new breed of music, bringing together jazz improvisation, mellow soul, and sampled beats.

“Executive Life” opens the album with a staggering loop over which drummer Jamire Williams and bassist Paul Bryan lay a sturdy groove. It’s not until almost a minute in that Parker and alto saxophonist Josh Johnson make their first appearance, dropping in with a melodic line you’ll find yourself humming a day later. But it’s the atmospheric, open-ended B section that takes over the bulk of the tune—a languid weave of fragments from all instruments (including a range of keyboards played by Parker and Johnson) that demonstrates both Parker’s knack for postproduction editing and his interest in cultivating a mood over showing off chops.

According to International Anthem, Parker has been living with and working on the samples and programmed beats on The New Breed for several years. They come to the fore early in the album with the fleeting “Para Ha Tay” and the spare, repetitive “Here Comes Ezra.” Other worthy if abbreviated beats are hidden at the tail ends of longer tracks—I won’t say where since part of the fun is encountering them unexpectedly.

One of the richest pieces on The New Breed, “Jrifted” offers the first solo proper, halfway through the album. Johnson’s alto playing here is well integrated into the mood and groove, nimble and inventive without calling undue attention to itself. On the following track, “How Fun It Is To Year Whip,” Parker himself steps into the spotlight, taking a laidback solo with echoes of Jim Hall. “Get Dressed” turns things up a notch as Parker spins soulful, jazzy licks over both a tight 16th-note ride cymbal groove and a bed of sampled voices, lending the track a just-right party flavor.

Bringing Parker’s emphasis on family history and future sounds together is the closing track, “Cliché,” on which Parker’s daughter Ruby sings in duet with Johnson’s alto. It’s possible to read the lyrics as a message to anyone distressed by the increasing union of jazz and hip-hop culture (remember when we reviewed Flying Lotus?): “He told me the end is coming / I told him that’s a cliché.” If Parker’s vision sounds to you more like a beginning than an ending, you can find The New Breed at International Anthem’s Bandcamp page and the Downtown Music Gallery.