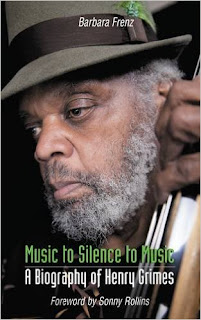 One of the enduring mysteries of jazz is what happened to Henry Grimes from 1969 or so until 2003. There are many questions, but few answer. Barbara Frenz’s new biography of Grimes, Music to Silence to Music, seeks to fill in the many unknowns about Grimes’ life.

Henry Grimes was one of the most influential bass players of the Sixties, regularly performing and recording with musicians like Sonny Rollins, Albert Ayler,  Cecil Taylor,  Charles Mingus, Don Cherry, Andrew Cyrille, and so many more. Then one day the music world blinked and he was gone.

Frenz’s research is extensive and well documented including original interviews with Henry Grimes, Sonny Rolllins, Clarence Becton, and Andrew Cyrille. The book contains almost seventy pages of footnotes, bibliography, and references.  My only real complaint about the book is I’d have liked to see a full discography included, but links are provided to the extensive discographies available online (and given Grimes’ extensive recording activies both before and after his disappearance, this would have substantially increased the size of the book).

The book does an excellent job of recounting Grimes’ early years in Philadelphia before his move to New York. His training both as a classical musician (including studies at Juilliard) and in rhythm and blues bands laid the foundation for his beautiful, strong bass playing. Extensive documentation is provided for his work in the 1960s. Jazz would be radically different if Grimes hadn’t been a part of it. Just listen to the bootlegs from the 1963 tour with Sonny Rollins, Don Cherry, and Billy Higgins, or his work with Cecil Taylor or Albert Ayler. Check out The Call, the only album Grimes released as a leader. The man was a revolutionary.

Sick of New York and, like everyone else, unable to make a living, Grimes briefly moved to San Francisco before settling in Los Angeles. Broke and unable to afford much needed repairs to his bass, Grimes sold his bass sometime around 1969 and that was it. No more performances for thirty-four years.

During this time, even though Grimes wasn’t performing publicly, he continued to work on his music in his mind and began to write while working odd jobs in construction and janitorial work around L.A. Frenz includes an extensive discussion of Grimes’ writing. Some of his poetry was published in 2007 by the German publisher Buddy’s Knife under the title Signs Along the Road. The discussion is informative and provides valuable insight into how Grimes kept himself mentally alive during the long decades of isolation. I am surprised that no mention is made of Sun Ra’s poetry, which in many ways seems like the obvious parallel.

No one in the music world knew what happened to Grimes. Somewhere along the way he lost his address book. There are hints that some of his isolation was related to depression and other problems. Grimes wasn’t and still isn’t the kind of man to ask for help. As his work was being reissued in the ‘80s and ‘90s, liner notes and articles frequently mentioned his death.

In the fall of 2002, social worker and jazz fanatic Marshall Marrotte managed to track Grimes down, living in a shitty hotel in a bad section of Los Angeles. Marrotte ecstatically announced the news to the world, beginning the process of bringing Grimes back into the fold. Eventually William Parker donated a bass to Grimes and within weeks he was performing again, first in L.A. and eventually back in New York. Grimes is a now a very active musician, performing with old friends and helping to push the newer generation of players into outer space.

Music to Silence to Music is a well researched and easy to read biography, clocking in at 234 pages (not including footnotes and the bibliography). It provides answers to some of the mysteries in Grimes’ life, as much as it is possible to answer what are essentially unanswerable questions. We’ll never know what really happened to Grimes. It appears that in many ways Grimes doesn’t fully know himself.

If you’re interested in the history of jazz, free jazz, creative music, whatever label you want to put on it, read this book, it is going to be an essential part of that history.

As a side note, it was a real treat to see Henry Grimes being celebrating at the Vision Festival this year.  With performances from Grimes on bass and violin in various combinations with new and old collaborators, including performances of his poetry.  Given his pivotal role in creating this music, it’s beautiful to see him come full circle.

Good review. There's another review of the book on Point of Departure:

More reviews of Music to Silence to Music ...

... and a response to the review of pointofdeparture.org:

Thank you David Menestres for the positive reception - very much appreciated!

To all curious readers, here's a working link to Barbara's response to the PoD review.