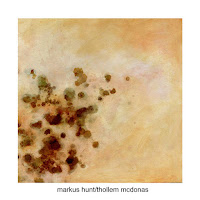 Recorded in Misión Y Convento at the Plaza De Española, New Mexico, Adobe documents the meeting of two improvisational heavyweights, pianist Thollem McDonas and bassist Markus Hunt. It isn’t entirely surprising that the two have ended up in the parched deserts of the southwestern United States; from a quick glance at his profile on the Edgetone website, it’s clear that McDonas is perpetually on-the-move, and what better place to carry out nomadic impulses than in New Mexico? It’s this same impulse - seeking, exploring, endlessly cutting out new shapes in the terrain - that informs much of Adobe. Markus Hunt is no stranger to creative questing, either; as a former member of Rent Romus’ Life’s Blood, as well as his own Equity & Social Justice Quartet (whose The Whisper of Flowers showcases Hunt’s compositional chops), he has done his fair share.

The “Introduction” is just that - an entry-way into the abstruse enclosure that McDonas and Hunt have constructed. With a spatter of hesitant notes from McDonas and Hunt’s busy runs, it perfectly captures the pensive, lost-in-thought mood that is all over this recording. That’s not to say they aren’t versatile, however. On “De la Cabeza de José,” the duo start with an abstract foundation, McDonas conjuring rattles and clanks from his piano that bounce airily around. With the title track, “Adobe,” Hunt switches to arco, teasing out a series of notes that moan and tremble, ghostly approximations of the spirits from Luke 11:24 - the ones that “walketh through dry places, seeking rest; and finding none . . saith, ‘I will return unto my house whence I came out.’” On “Broken Haiku,” McDonas’s piano sends out shards that cut like clay fragments, all while Hunt’s bass provides the melodic glue that keeps them (loosely) held together. The atmosphere of restlessness carries on throughout most of the pieces, most of which are around the three-minute mark. With such short running times, it might be supposed that there’s no time to develop the improvisations, to let them breathe. While that is a potentially valid complaint, I believe that McDonas and Hunt succeed in what they’re trying to do. As McDonas himself notes, “If you’ve ever gone to an unfamiliar place and found home, that is at the core of this recording.” These pieces are skeletal and uncanny, sure, and they are full of the uneasy tension that can arise when you find yourself in a strange land, amongst strange people; it’s that same tension, however, that allows us to connect with these sounds, to feel that we are discerning pieces of ourselves within them.